First NFP release after the election,will it shake up the market?

Abstract: The heat of 2020 U.S. election seems to have completely overshadowed the market's attention on the upcoming non-farm payrolls data for October. The employment and economic issues are still the focus of long-term discussion and concern. How is America’s employment these days? Could the October non-farm payrolls data beat expectations yet again, sending a positive signal to financial markets that have been "jumbled" by the election?

Looking back at previous data, the U.S. added 661,000 jobs in September, well below market expectations of 800,000, while the unemployment rate was 7.9%, better than expected at 8.2%. The improvements in September's non-farm payrolls data were driven by particularly strong growth in leisure and hospitality, retail, and health & social assistance. Government employees, on the other hand, which had been a strong performer in August's non-farm payrolls report, were a drag on the September's, as illustrated below: 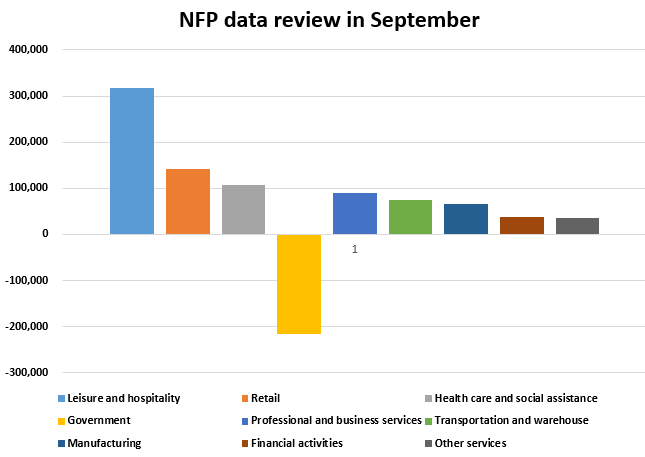 There is no doubt that the positive employment data have improved the market's view of the current U.S. economic recovery and seem to suggest that the recovery momentum persists. Can the economic recovery sustain its momentum in October? What factors are behind the U.S. job market right now?

COVID-19 staged a comeback: the U.S. hit peak in infections

Many Americans choose to go to the polls to vote in the election, the COVID-19 pandemic is re-sweeping across the country in the increasingly cold season. In October, new cases in the United States rose to nearly 100,000 a day, breaking the previous record of 70,000 a day and setting a record for the number of new cases in a single day for any country. In addition, 31 states recorded new infections each day in October, as shown below: 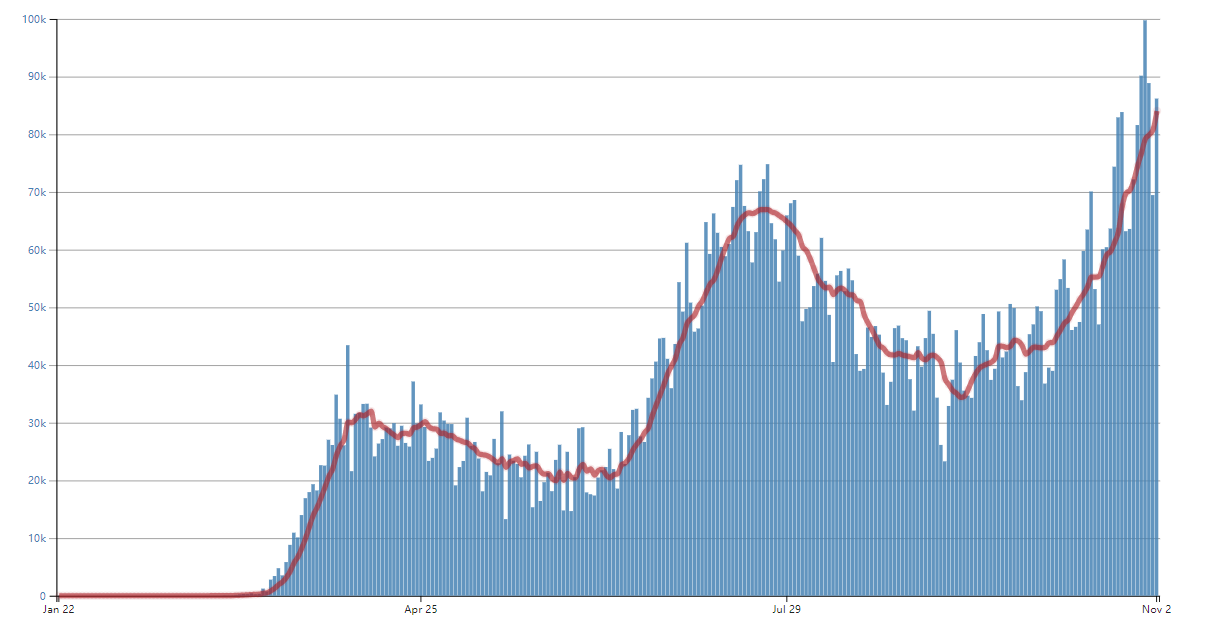 As the another wave of the COVID-19 arrived, some U.S. states will again face economic blockades, forcing people to limit their economic activities. Beyond doubt, the wave will be a blow to an already slowing recovery in the U.S. economy. The absence of economic aids, the most fundamental driver of the recovery, will assuredly lead to increased uncertainty about the future of the economy.

The new stimulus package is delayed, the US labor market is uncertainty

America's bipartisan negotiations over a new stimulus package with $2.2 trillion are fraught with difficulties. The Senate, the House of Representatives and the White House had vowed that a deal would be reached before the election. But the package has been delayed by three months, from July 31st, as government aid to America's small and medium-sized businesses has stalled, forcing them to lay off workers. Besides, as we mentioned earlier, airline furloughs are worrisome. The bailout of the U.S. airline industry by the U.S. government expired in early October, and some airline employees have taken redundancy payments or temporary leave. As a result, the breakdown in stimulus package negotiations threatens to create yet another wave of economic pain in the U.S. and hamper the recovery of the U.S. job market. What about American jobs in October?

The number of Americans filing new claims for state unemployment benefits continued to hit a record low in October, falling to the lowest level since the outbreak of COVID-19 and falling below 1 million for several weeks, as shown below: 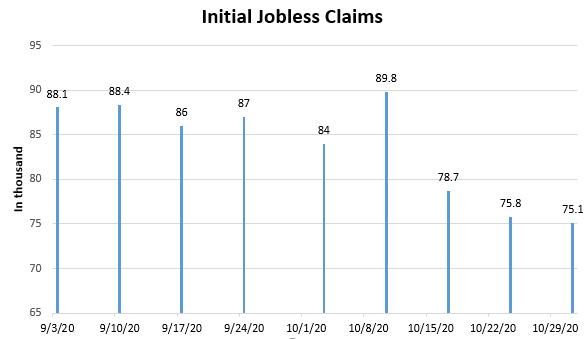 In terms of U.S. economic data, US GDP recorded 33.1% in the third quarter, which not only beat expectations, but also hit a record high. U.S. manufacturing in October expanded at its fastest pace in nearly two years, helped by the strongest order growth and better employment since early 2004. ISM manufacturing PMI showed U.S. industrial activity index rose to 59.3 from 55.4 in September, beating almost all economists' median expectations of 56. The employment component of the index was 53.2, fully indicating that manufacturing employment is gradually recovering from the recession. However, the US service sector PMI data shows that employment index declined to 50.1 from 51.8, which is a warning of slow labor market recovery.

How will financial markets be moved by the coming non-farm payrolls data?

2. Dollar weakness may make a comeback, and gold seems poised to take advantage. After the election, the focus will again be on the stimulus package, and with that, the dollar looks set to remain weak. its safe-haven counterpart, gold, may have an opportunity as the pandemic worsens in the majority of the world and is likely to weaken the dollar. See real-time gold price chart:

To sum up, despite plenty of upbeat news about on the U.S. economy and employment data, there is no denying that the worsening of the COVID-19 pandemic is enough to reverse the progress of the economic recovery. In addition, economic and job growth will slow due to the delay of the stimulus package. As a result, the U.S. employment data for October may continue to improve slightly, but employment may face more serious challenges ahead.

Last One How To Trade Gold CFDs in 2020? Gold Trading With CFD
Next One Gold price analysis: Gold fluctuates violently as COVID vaccine is on the way！
Latest Release
Popular Reading