Abstract: The resurgence of the COVID-19 pandemic and the escalating blockade have caused concern about the employment in the United States. Will they deal another heavy blow to the slowing recovery of the U.S. economy? Further guidance will be provided by the release of non-farm data this week, and it will be interesting to see how the first non-farm payrolls report in 2021 will affect gold, U.S. stocks and other markets.

Post Contents [hide]
​Employment growth slowed sharply, so the non-farm data may still be not optimistic

Looking back at November's non-farm data, the improvement in the U.S. labour market has slowed markedly. Non-farm payrolls rose by just 245,000 in November, sharply below the 610,000 reported and the 440,000 expected, the slowest pace since the employment recovery began in May. While the U.S. unemployment rate fell to 6.7% from 6.9% in October, it was notable that the labour force participation fell to 61.5% in November. In terms of employment, the transportation and warehousing sector added 145,000 jobs. Employment in the hospitality sector, which was hit hard by the COVID-19, rose by just 31,000. The economic blockade caused by the worsening of the pandemic has reduced employment in retailing by 35,000. Needless to say, a major contributor to November's slow job growth was the continuing deterioration of the COVID-19 in U.S. In addition, large crowds gathered during the Thanksgiving holiday, causing the pandemic to get further out of control. As a result, America's labour market may have weakened even more in December.

New cases continue to surge, but vaccines do not solve this immediate problem

So far, the number of new cases in the United States has soared to nearly 300,000 a day, a record high. The death toll peaked in late December. In addition, a more easily transmitable variant of the virus, similar to that found in Britain, was discovered in America for the first time in late December, making the pandemic even more difficult to contain. Although vaccination began in December, vaccine production may not be able to cover the rising number of new infections, and it remains to be seen whether the vaccine is effective against the mutated virus. As a result, the resurgence of the virus has prompted states in the United States to adopt more severe economic blockade measures, making the labor market worse. 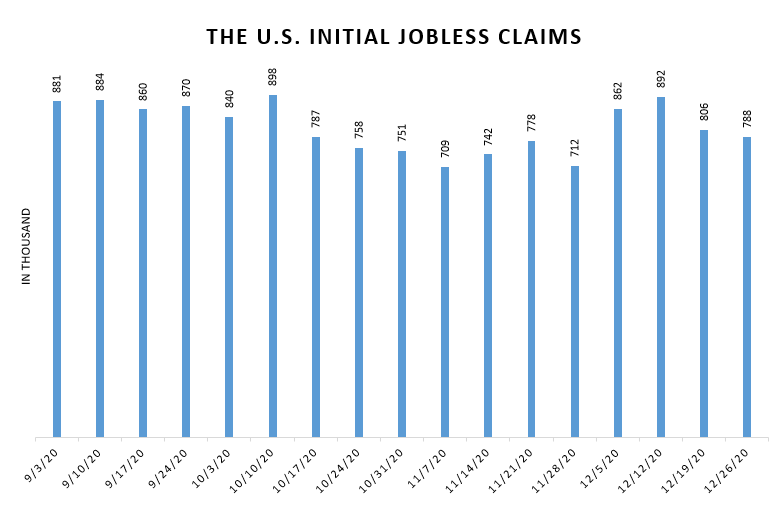 The jobless claims data showed the number of new claims rose sharply for three weeks in December and briefly approached October's peak of 896,000. While initial filings fell in the last week of December, the Christmas holiday has made the data somewhat uncertain. The big jump in claims for jobless benefits in December will be further evidence that the improvement in non-farm payrolls could be weak or even stall.

The stimulus package has finally arrived, but recovery will take time

Although the government's approval of a $900 billion economic stimulus package, which included $600 in direct cash aid to Americans, has raised hopes, the measure may not be ready in time to address the jobs problem in the short term because the legislation is not finalized until late December. In addition, the recently-released data showed that personal income fell to -1.1 in November, while personal consumption fell to -0.4, which is enough to indicate that the U.S. economic recovery is already slowing. So will December's economic data help to gauge the state of the labour market?

The latest ISM data showed PMI of the manufacturing sector rose to 60.7 in December, its highest level since August 2018, and the economy has expanded for eight straight months. The employment index rose by 3.1 percentage points to 51.5%, up from 48.4% in November, suggesting that U.S. manufacturing employment has finally returned to expansion after contracting in November. However, according to ADP's monthly employment report, the US lost 123,000 private payrolls in December, which is first decline since April.

How about financial markets?

1. Gold. If the non-farm data are negative, then gold may have an opportunity to break above the resistance level. The recent worsening of the global epidemic and the weakness of the U.S. dollar have pushed the gold price above the key resistance level of $1,900 after two weeks and briefly up to around $1,950. So far, the metal has rallied strongly and achieved five consecutive positive results. Nonetheless, gold gives back the advance as the U.S. treasury yields broke above 1%.  According to the Bollinger Band, gold is currently in an expansion range, and its price has risen above the Bollinger band. Additionally, the relative strength index (RSI) suggests gold fell back from overbought territory, which could signal weakness for gold bulls.

2. The U.S. stock market. Since previous reports have had little impact on U.S. stocks, the non-farm payrolls report may not be a big move. The U.S. stock market fell on the first day of trading in 2021, but could find long-term support based on aggressive fiscal and monetary policies from the Treasury and the Federal Reserve, as well as the improving vaccination. However, the three major U.S. stock indexes have been hitting record highs in 2020, leading some market analysts to believe the market could be in for a pullback.

3. Bitcoin. While the price of Bitcoin has risen dramatically, at one point above $35,000, it is difficult to link it to the fundamental non-farm data. But JPMorgan recently set a bold long-term price target for Bitcoin, which they believe could rise to $146,000 and compete with gold as an "alternative" currency. Bitcoin's price has been gaining momentum thanks to endless demand from institutional investors. Still, the risks of investing in Bitcoin have been magnified as the price has soared. As a result, investors should be wary of the risk of a sharp drop in its price.