Abstract: The steady decline in initial claims for jobless benefits points to a sound foundation for U.S. jobs recovery, even as the recovery in the U.S. labor market shows signs of slowing amid virus spreading. The consensus estimate is that non-farm payrolls was likely to increase by 750,000 in August, down from 943,000 in July. Separately, the unemployment rate might fall from 5.4% to 5.2%. As the non-farm payrolls data is closely related to the next move of the Fed to tapering, gold and dollar will be in violent volatility.

The July U.S. non-farm payrolls data cheered the market. The non-farm payrolls surged by 943,000 and the unemployment rate fell to 5.4% from 5.7% in June, much better than markets had expected, despite the continued spread of the Delta variant. The labor-force participation rate rose to 61.7% in July, the highest level since the COVID-19 outbreak, suggesting that the overall unemployment rate has fallen even more sharply. In terms of employment, the leisure & hospitality industry and education sector continued to be major contributors to its increase in July. The leisure and hospitality sector added 380,000 jobs, with bars and restaurants contributing 253,000 of those jobs. Similarly strong growth was seen in education, which added 261,000 jobs, as shown below: 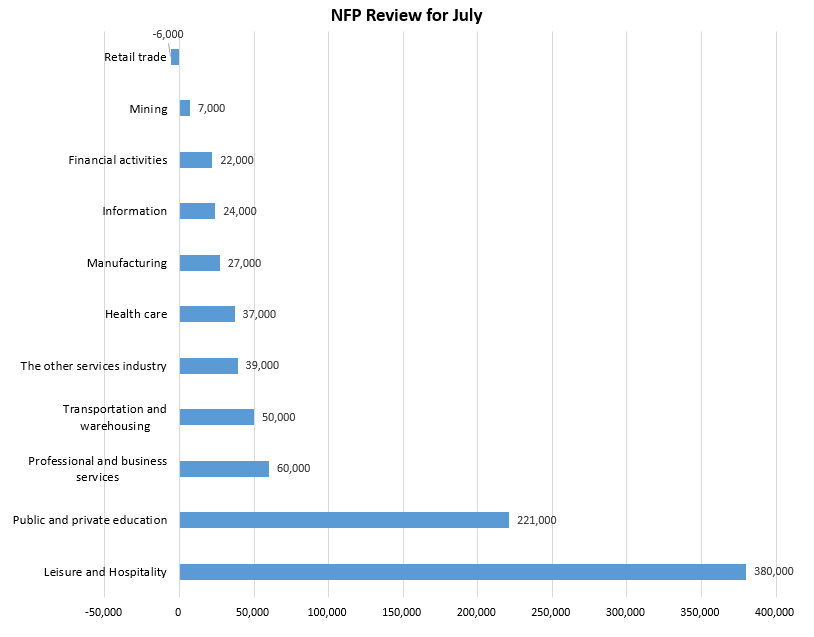 Source from: U.S. Department of Labor

In addition, average hourly earnings went up by 0.4% month-on-month and 4% year-over-year in July, also beating market expectations. As a result, investors' fear of inflation was growing as the U.S. labor market improved and wages rose continuously. At last week's annual Jackson Hole Economic Symposium, Fed Chair Jerome Powell did not give a clear timeline for tapering stimulus, so the market is now waiting for August non-farm payrolls data for further insight into the Fed's next move.

The ongoing spread of the Delta variant is slowing activity by discouraging consumers and businesses from traveling and gathering, somewhat dampening the U.S. economic recovery. According to Bloomberg, Transportation Security Administration (TSA) data shows that the number of travelers passing through airport checkpoints has dropped since mid-August. The seven-day average daily ridership fell to about 1.76 million at the end of August from 2.05 million a month earlier. While the decline is partly due to the end of the summer travel season, many airlines reported slowing bookings and rising cancellations. A shift in spending from retail to services such as hotels and restaurants had been cited by many as a major reason for the decline. But spending weakness in retail and other service sectors suggests the current economic recovery is faltering.

In addition to the economic impact of the pandemic, there are signs of slowing growth in demand for labor in America. On the one hand, many workers may be less willing to work due to the impact of the virus, aggravating the tight situation in the job market. On the other hand, the data suggest that employment in industries that require close human contact is declining. Furthermore, demand for labor is likely to fall further as spending in service industries such as tourism and catering dropped. As a result, the non-farm payroll data was forecast to improve more slowly, with 750,000 jobs added in August, weaker than in June and July, but the unemployment rate likely fell to 5.2% from 5.4%.

The surge in new cases has prompted individual state and local governments to impose stricter restrictions. California, for example, has made it mandatory for people to wear face masks indoors. And New York state said it would require people to prove they've had at least one dose of the vaccine before allowing them to dine in indoor restaurants. The number of Americans filing new claims for unemployment benefits in August hit the lowest level since the outbreak, suggesting a sustained recovery in the labor market, even as the virus added uncertainty to the recovery, as shown below: 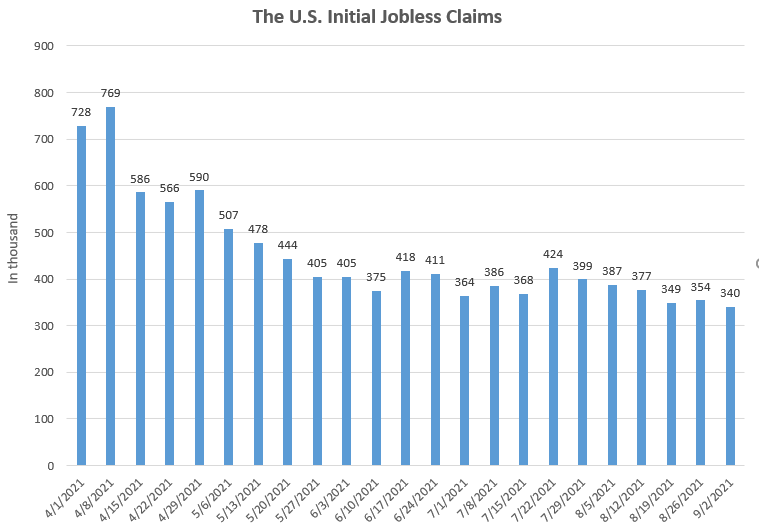 Source from: U.S. Department of Labor

The non-farm payrolls report will play a key role in the Fed's next monetary policy move, so the focus will be on whether the labor market has recovered enough to allow the Fed to taper its quantitative easing.

How will gold and dollar respond to the non-farm payrolls data?

1. At the Jackson Hole Economic Symposium, Fed Chair Jerome Powell said the Fed would slow the pace of bond purchases this year because of the strong recovery in the US. He signaled no imminent interest rate hike and did not mention when tapering would begin, so investors took his comments as "dovish". And some in the market believed the Fed seemed to be doing all it can to stimulate employment while ignoring the inflation risks. Gold stood at $1,820 an ounce, its highest level in nearly two weeks, as the Fed maintained its easing policy. However, the metal could face downside risks if the non-farm payrolls continue to show strong growth and the Fed is likely to provide guidance on the timing of tapering at its September policy meeting. Conversely, if jobs numbers fall short of expectations, gold could move higher.

2. The U.S. dollar index surged to 93.7 on news that most Fed officials were willing to start reducing asset purchases before the end of the year after the minutes of the Fed's July meeting, breaking through the key resistance level of 93.4 at the end of March. However, the index suffered as Mr Powell's remarks at the Jackson Hole Economic Symposium were less hawkish than expected. If the non-farm payrolls data is more pessimistic, then concerns about the impact of the virus on the U.S. economic and employment recovery will intensify, and the Fed will continue to maintain its quantitative easing to deal with the economic uncertainties. Consequently, the dollar may be in turmoil again. Otherwise, a sustained strong improvement in employment data would further the Fed's plans to tighten its easing policy and thus support the dollar. Therefore, investors should take advantage of the trading opportunities presented by the non-farm data and adjust gold and currency positions ahead of time.