Joe Biden took office: Could he be a stumbling block for U.S. stocks?

Abstract: A new landscape has emerged in American politics. As Joe Biden has entered the White House, the U.S. stocks surged to new highs. What changes will the policies of Democratic President Joe Biden bring to the U.S. stock market? Will he become a "stumbling block"? Let's have a look.

Many investors breathed a sigh of relief at the successful conclusion of the much-anticipated U.S. presidential inauguration. U.S. stocks soared on Inauguration Day, fueled by risk-seeking sentiment, and the executive orders Mr. Biden has signed since taking office have continued the rally. The S&P 500, Nasdaq 100 and Dow hit 3688.5, 3562.7 and 31285, respectively, again breaking all-time records. On top of that, as the earnings season gets under way, most public companies are beating Wall Street's expectations with stellar results, one of the main reasons for the rally. While Biden's expanded economic stimulus and pandemic prevention policies are driving the rally for now, Biden's long-term policy views are a bullish worry for U.S. stocks. So what are some of Joe Biden's policies that will have a direct impact on the market?

Biden's policy to increase corporate taxes is the biggest risk

In 2017, former President Donald Trump cut the corporate tax rate from 35% to 21%, making it the biggest change to the tax code during his presidency. During the campaign, however, Biden said that while he would continue to cut taxes for middle-income families, he would sharply increase taxes on those making more than $400,000 a year and raise the corporate tax rate from 21% to 28%. Also on the list are taxes on foreign income earned by U.S. multinationals, as well as capital gains. As a result, a substantial tax increase would reduce U.S. corporate profits, negatively affecting investor returns. Once the tax increase policy is implemented, it will undoubtedly make the United States stocks under pressure. Biden is likely to delay the tax increase as the COVID-19 crisis worsens and the economic recovery falters. But it's worth noting that the tax increase, while bad for business and hurting corporate profitability, could be a direct boost to the massive economic stimulus proposed by Biden, pushing U.S. stocks higher in the short term.

How will Mr. Biden handle the relationship with Big Tech?

The Trump administration has put antitrust and regulation of big tech companies on the agenda before, with executives from Facebook, Apple, Google, Twitter and Amazon summoned for several times to testify before Congress to explain their business practices during his four years in office. So investors are more worried that Biden will push for new antitrust laws against Big Tech. During his campaign, Biden said publicly that if social media is not used properly, it will erode the foundation of American democracy. In addition, calls to reduce the influence of big tech companies have gained renewed attention in Washington, thanks in part to false claims on social media platforms that have spurred Trump supporters to "take on Congress." This makes the government's regulation of technology companies increasingly strict, which will become a potential risk for technology companies. It's worth noting, though, that Democrats have long advocated for tech innovation, and that the Obama years were a time of political glory for Big Tech. Now that tens of thousands of Americans are relying on technology to work from home because of the new pandemic, some anti-tech arguments are being undermined. Coupled with the current Democratic-dominated House and Senate, this could present an opportunity for the tech industry. But how the U.S. government will find the balance may be the focus.

Biden has made climate change a priority since taking office

U.S. President Joe Biden signed an executive order on Inauguration Day to undo Trump's legacy of ignoring climate change -- rejoining the Paris Agreement, opening a new milestone in the development of the renewable energy sector. At the same time, another executive order was signed to reverse the previous Trump administration's reduction of vehicle emissions standards. Moreover, the Biden administration is committed to encouraging consumers to use electric vehicles, which produce zero emissions and reduce environmental pollution. All of these policies will indicate higher costs for consumers to buy gas-powered cars, but incentives such as tax credits for electric cars and cash-for-clunkers purchases will greatly benefit electric car makers such as Tesla. As a result, the electric car industry and the new energy industry will reap dividends during the Biden administration, but the blow to the energy industry, especially the oil industry, will be huge.

The U.S. stocks were encouraged by Mr. Biden's accession and the executive orders he signed. Many investors believe Biden's ambitious approach to the pandemic will bring the worsening crisis under control and put the U.S. economic recovery back on track. Moreover, Biden's massive $1.9 trillion stimulus package is now in the negotiation stage, and though it has yet to be voted through Congress, more aid seems likely. On top of that, Janet Yellen, a former Fed chair, became Treasury secretary, boosting market confidence in a "big revival" in the United States. Therefore, the new political climate in the United States may become an important driving force for U.S. stocks to rally.

By technical analysis, the S&P 500's rebound from its 20-day moving average on Jan. 15 led to a four-day winning streak that briefly touched an all-time high of 3,866.5 on the upper Bollinger Bands, as shown below: 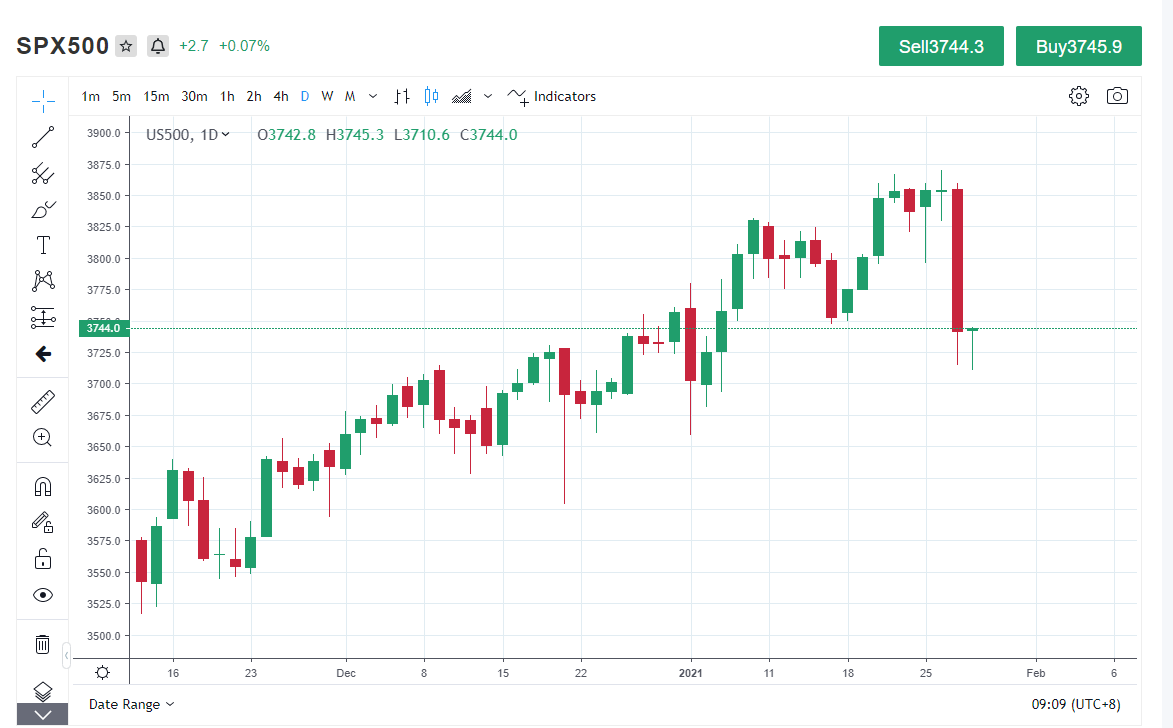 However, the S&P 500 has been in a narrow downward trend at the top amid doubts about the passage of a massive economic stimulus package through Congress, but a long tail pattern on the S&P 500 on January 25 suggests that bulls have stepped in to pull the decline back and further volatility on the S&P 500.

In the long term, how Mr. Biden implements his policies remains the focus of financial markets' attention. In the short term, the more stable political situation in the United States, the gradual acceleration of vaccination speed and other positive factors provide a good macro environment for the upward trend of the United States stocks, which also makes investors regain confidence in the recovery of the economy. But the recent increasing participation of short-term traders and the massive economic stimulus bill negotiations uncertainty will lead to increased volatility in the US stock market. As a result, investors need to keep an eye on the impact of Mr. Biden's policies, as well as the volatility of the massive economic stimulus bill and technical pressures.