Abstract: Gold bulls regain their footing and reverse the market dominated by the bears as turmoil grips the US Treasury bonds. Rising inflation fears should have been good for gold as a hedge against inflation, but the metal's upside has softened somewhat as investors have become more confident about economic growth. Therefore, investors should be aware of whether gold bulls can currently stand firm and continue to break high.

Gold rebounded from its double dip, breaking above $1,790 an ounce at one point, its highest level in nearly two months, as bond yields retreated and the dollar weakened. Specifically, the metal's rally was fueled by a strong economic recovery that has pushed Treasury yields sharply lower rather than higher despite positive U.S. economic data, and by a series of record highs for U.S. stocks that have been a drag on the safe-haven dollar. However, how much upside gold can have has been a major concern for gold investors. Previously, gold prices had fallen sharply on the back of  improving economic fundamentals and the strength of gold bears, and the metal's recovery had been vulnerable, if any. However, can this rally change the previous trend to break the high? What are the factors that dominate the gold price trend?

Bond yields have been driving the price of gold

The sharp sell-off in Treasury followed a strong economic recovery that led to a jump in Treasury yields, a major factor in gold's steep decline. Retail sales surged 9.8%, the highest increase since May 2020, on the back of the vaccine acceleration and government stimulus. There has also been a marked improvement in the U.S. labor market, with the number of Americans filing new claims for state unemployment benefits falling to 576,000 in the latest report. While a large number of workers are still out of work, the lagging labor market is finally improving in line with the economy. Still, recent U.S. economic data have been remarkable, but it has prompted investors to add to their holdings of U.S. debt, driving prices higher and yields on Treasury bonds unexpectedly sharply lower. The yield on the 10-year Treasury note fell from a high of 1.7 to around 1.53 at one point, helping to push gold out of its narrow range and aggressively higher. It is also indicating that gold prices are more closely linked to yield volatility. So why is the current move in yields so unusual, and what is happened in the bond market?

Concerns that the Federal Reserve (Fed) may gradually taper its quantitative easing program have been exacerbated by market optimism that rapid growth could lead to higher inflation as a result of accelerated vaccination and increased government stimulus. In addition, the risk-seeking mood has been pushed up, investors' demand for safe-haven U.S. Treasury has greatly reduced, leading to a sharp rise in Treasury yields. The move followed news that Japanese banks and insurers had been aggressively selling Treasuries, causing yields to rise, which in turn affected other investors' psychology and market views , leaving Treasuries in the cold. But according to the Wall Street Journal, the Japanese investors are buying bonds again. They bought a net $15.6 billion worth of foreign bonds last week, the most since November, data showed. As a result, Japanese investors jumping into the bond market may be one of the main factors behind the surprise pullback in yields. However, it's worth noting that the pullback may prove temporary, since many global financial institutions predict that 10-year Treasury yields could rise to 2% or even as high as 2.5% by 2021.

Opportunities and risks in the gold market

1. Gold gains short-term opportunities from intensified yield volatility. Some countries are getting vaccinated faster and their economic recoveries are catching up, so that could push yields lower, which in turn support gold's upside. But in the medium to long term, Treasury yields may continue to climb. For one thing, investors are becoming more confident about the prospects for the economic recovery, making Treasury notes much less attractive. An improving U.S. economy and stronger inflation, on the other hand, may be enough for the Fed to raise rates sooner. That makes it hard for gold to keep going higher.

2. While ETF outflows continue, big consumers will import more. Capital outflows from the gold market have continued in the past two months, with North America and Europe leading the way, according to the World Gold Council. But now China, the world's largest gold consumer, allows domestic and oversea banks to import large amounts of the metal, which could boost prices.

Gold fell to around $1,678 an ounce, near a nine-month low, as the pace of U.S. vaccination efforts and Biden’s $2.25 trillion infrastructure plan boosted U.S. bond yields and the dollar. It was close to the March 8 low, so gold was subject to a double-dip pattern, as shown below: 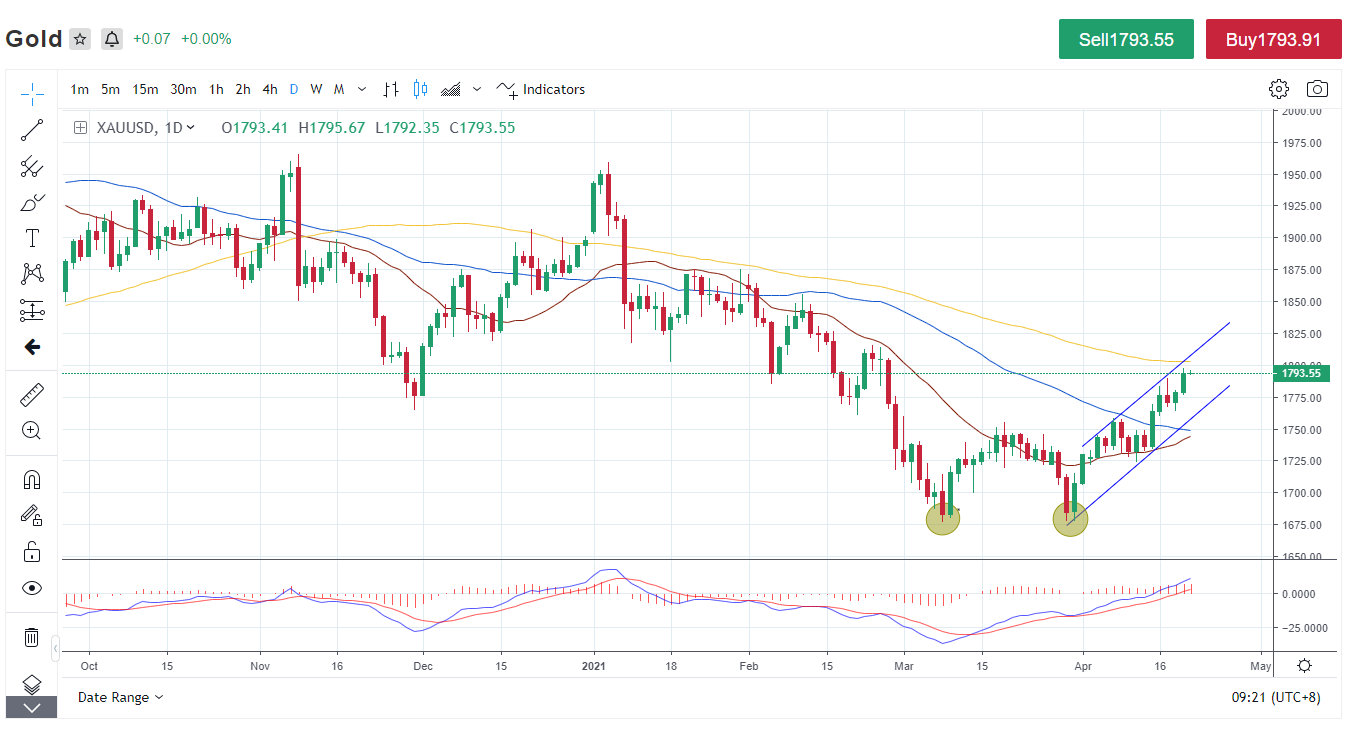 As illustrated in the chart, the price of gold bottomed at $1678 an ounce and rebounded, briefly climbing as high as $1758.5 an ounce. After nearly a week of range-bound trading, gold rallied to $1790 an ounce, then climbed to $1797.5 which is the highest level in nearly two months, as U.S. Treasury yields fell steeply. Gold is currently on the upward path, but pulling back after hitting the upper ceiling, indicating that gold bulls have little momentum to rally. Additionally, the current 20-day and 50-day moving average are approaching and may be intentionally forming a "golden cross", so gold seems bullish from technical analysis perspective.

All told, gold's appeal may return to investors in the short term as expectations of higher inflation is becoming reality. And the gold market is more likely to regain trading opportunities due to its increasingly close correlation with U.S. Treasury yields, compared to the bearish trend of the past. But in the medium to long term, while inflation is inevitable, higher bond yields as the global economy recovers seem equally inescapable, which will undoubtedly weigh on gold. Therefore, investors should focus on short-term upside resistance to gold and take advantage of the volatility in gold prices due to the turmoil in U.S. bond market.