Gold Price Analysis: Gold recovery is stymied as the bears are gathering momentum

Abstract: U.S. bond yields had presented another violent rally, with the 10-year Treasury yield above 1.6%, and gold also sold off on the rise in opportunity cost. The metal was then slowly recovering from a two-week selloff, helped by a recent increase in risk-off sentiment. But continued improvement in the outlook for global economic recovery and accelerated vaccination have limited the upside for gold. How long can the gold rebound last?

The gold market has suffered since the start of 2021, particularly from mid-February to early March, when gold bulls lost ground and prices fell to a nine-month low of around $1,676.9. For the most part, the rally in Treasury yields has led to a strong recovery in the dollar and a rise in safe-haven Treasury yields that has eroded the appeal of gold by increasing the opportunity cost of holding it. As a result, capital flows into risk assets, such as oil and equities, on the back of a continuing economic recovery and stronger inflation expectations. But gold has recovered slowly from its lows, peaking above $1,750 at one point, even though fundamentals remain weak. What has caused gold to regain its support? Can gold continue to rise?

Recently, Jerome Powell left the world the strong impression that the interest rates would stay at a range of 0-0.25% until 2023, and the Fed would keep asset purchases unchanged, both in size and at pace. It has played down inflation, saying it has the ability to deal with current inflation. Not only that, but a number of major central banks have decided to follow the Fed's lead and continue the previous scale of quantitative easing. That pushed bond yields down, but helped fuel a brief rally in gold. But then, the Fed decided it would end its emergency rescue program under the Novel Coronavirus, which loosened capital requirements for big banks -- pandemic-era exemption on banks' supplement-leverage ratios. The end of this policy, which allows banks to set aside more capital to cope with uncertain risks as assets grow, means banks may reduce their holdings of Treasuries to meet the Fed's requirement for replenishment of leverage. As a result, US bond yields continued to surge, while gold prices came under renewed pressure.

What does capital flows of gold market look like?

In the past two weeks, U.S. and European ETFs have continued to flow out of the gold market, while Asian gold markets have seen a sharp increase in inflows. According to the World Gold Council, Asian funds registered an increase of nearly 13% in capital inflows in the year to March 12, while outflows from the U.S. and Europe were nearly 8%, as shown below:

As seen from the chart above, capital outflows from the gold market during late February and early March have moderated recently. Bloomberg noted that Asian buyers have taken advantage of the recent sharp fall in gold prices. And there are two main factors for capital liquidity in the gold market. First, despite the lagging economic recovery in the Eurozone, the expected economic outlook in the United States and the United Kingdom is improving, and vaccination in both countries is accelerating, so the demand for gold is weakening. Second, strong physical demand for gold in Asia kept the price of gold in check.

Why has gold struggled to act as a hedge against rising global inflation expectations?

Gold has often been considered a hedge against inflation, but its hedging function was completely suppressed when the inflation expectation gradually increased. Some in the market believe that demand for gold has been weak because inflation has not yet materialized. Yields on 10-year Treasury Inflation-Protected Securities (TIPS), which are indexed to inflation, are still below zero, but have risen sharply since February, as shown below:

Since 2021, gold has performed poorly, falling 9% in the last three months, briefly to $1676.68. The decline accelerated from February to early March, but it did not go below the $1670 resistance level. It then recovered slowly and peaked at around $1755 an ounce, as shown below: 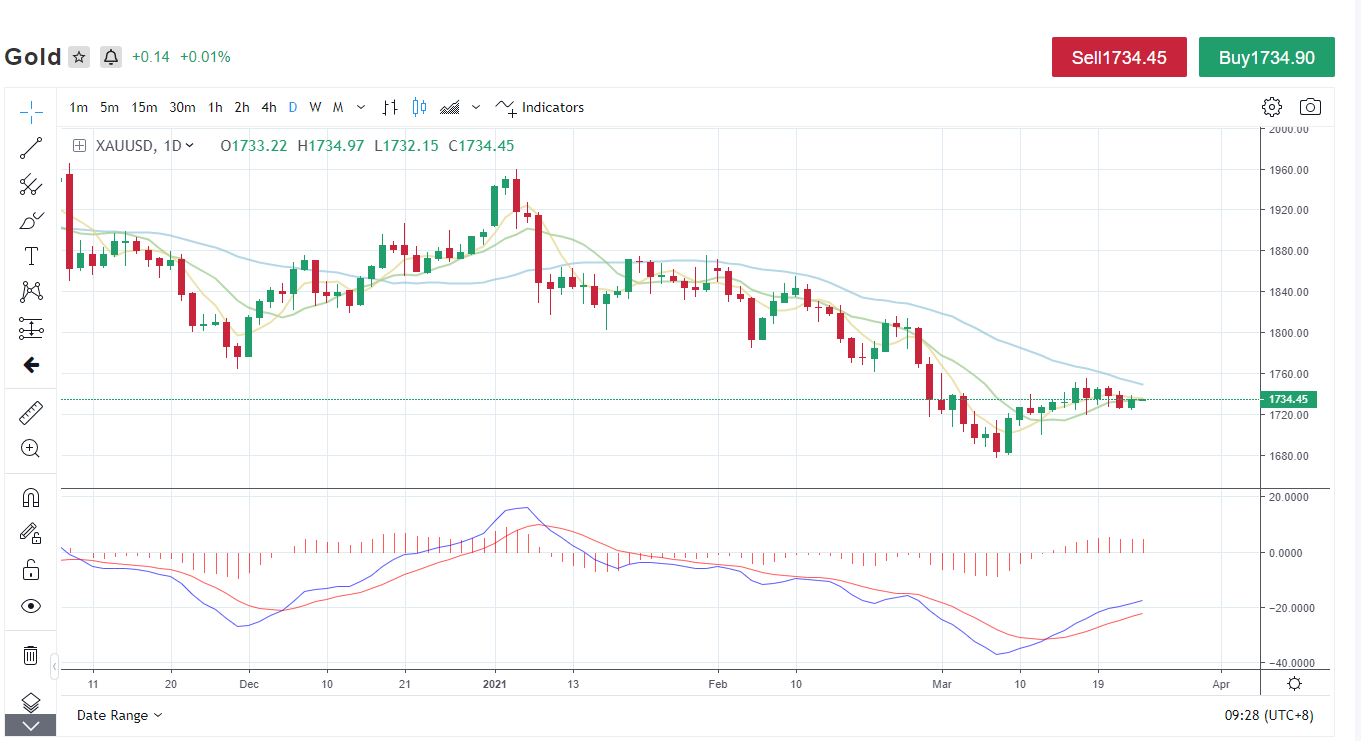 On top of that, the fundamentals continue to work against higher gold prices, and the gold market is facing the uncertainty of sharply rising U.S. bond yields. The market appears to have little support for gold buying, suggesting that the rally from multi-month lows may have run its course. Therefore, investors should focus on the volatility of the U.S. bond yield, take the consequent investment opportunities, and be wary of central bank interest rate hikes.

Last One How To Trade Gold CFDs in 2020? Gold Trading With CFD
Next One Gold Price Analysis: Will gold make a come-back as US treasury yields remain volatile?
Latest Release
Popular Reading