Abstract: The year 2021 is not off to a good start for gold bulls. Gold has suffered its worst sell-off since the vaccine's effectiveness announcement, as political uncertainty in the U.S. wanes and investors are optimistic about the outlook of the American economy. And the gold market is facing a tough challenge as rising yields on U.S. treasuries undermine the appeal of precious metals such as gold. In such case, what is the future trend of gold?

The price of gold has fallen sharply recently as the yields on the 10-year treasury note and the 30-year Treasury note rose to 1.15% and 1.88%, respectively. Looking back at the U.S. bond market in 2020, the yield curve control (YCC), once debated by Fed officials, seems very different from the current situation. The rise in yields is mainly due to market optimism about the outlook for the U.S. economy and expectations of higher inflation. As a result, gold started 2021 on the wrong foot, suffering its worst sell-off since Pfizer announced the effectiveness of its vaccine on Nov. 9. It briefly fell below $1,820 an ounce, giving up most of its earlier gains. Why has the rise in U.S. treasury yields had such a big impact on the gold market?

The sharp rise in U.S. treasury yields is a major rival to gold's rally

Because of the natural negative correlation between gold and interest rates, the U.S. treasury yields, which are closely related to interest rates, also show the opposite trend with gold. Not only that, the rise in U.S. treasury yields also boosted the dollar and weighed on gold prices. A comparison of the yield curve over the past three years reveals a positive curve slope, as shown below: 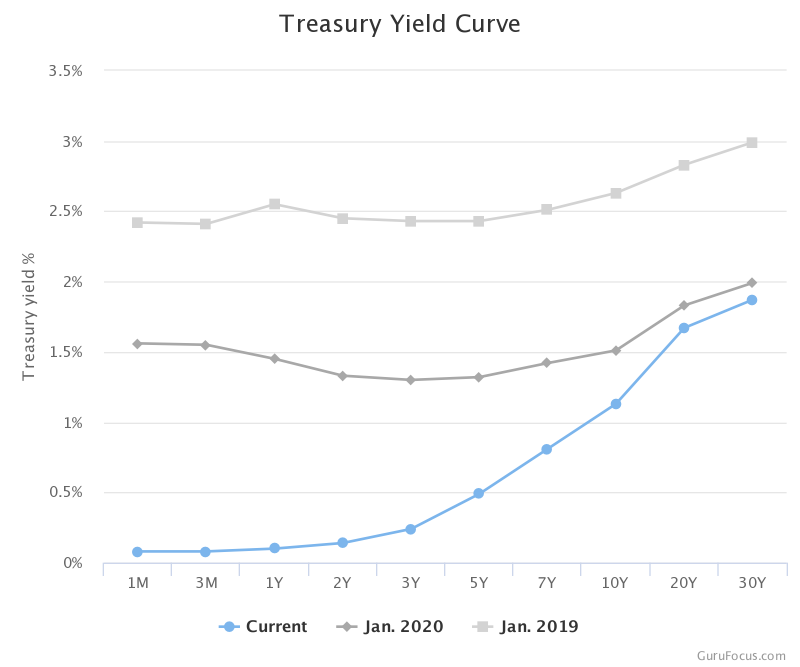 As the chart above shows, the 30-year treasury yield has returned to near pre-pandemic levels, largely because of recent political issues in the US. After months of U.S. presidential election and the House and Senate floor votes, the Democratic Party has won a majority in the Senate, leaving both the House and Senate under Democratic control. Then, Democrats in the House and Senate could clear the way for new President Joe Biden to implement his political and economic policies. If the larger rescue package that Biden has repeatedly emphasized gets through the Congress, that could lead to a big increase in government spending, which could also signal more borrowing and more supply of treasury bonds, driving bond prices down and yields up.

What does that mean for the gold market?

1. The rise in US bond yields will directly increase the opportunity cost of holding gold. Along with gold, U.S. Treasuries are considered risk-free assets, and investors often hold them as a hedge against the market's unpredictable risks. However, the rise in U.S. Treasury yields means that safe-haven players are more willing to shift assets out of gold and into bonds, reducing the appeal of gold as a interest-free asset.

2. The rise in U.S. Treasury yields, in part a reflection of confidence in the country’s economic recovery, has left gold out in the cold. The introduction of the vaccine last month has helped to ease the market's pessimism, although the global pandemic situation remains dire. President Donald Trump publicly acknowledged the Biden administration for the first time, lifting the political cloud over the United States, which also weighed on gold prices.

Will gold prices continue to fall?

The U.S. government is implementing more financial support and mass vaccination, which could lead to a strong U.S. economic recovery. Still, the Fed's monetary policy seems more important. The Fed signaled last month that its interest rates would remain near zero until at least 2023 and said it would continue to buy Treasury bonds at a pace of $120 billion a month until "substantial further progress" is made on its employment and inflation goals. However, there is a long way to go to make "substantial progress" in the recovery, according to the recent non-farm payrolls report. In addition, although bond yields and dollar prices are currently higher, it is worth noting that if Biden's massive economic stimulus materializes as expected, the dollar may fall again and perhaps gold prices will be boosted, so the gold decline may be temporary.

In late November, the price of gold fell to its lowest level since a record high on Aug. 7, hitting $1,764.2 an ounce before slowly recovering. It surged to $1,959 after breaking $1,900 for the second time on the back of a combination of worsening COVID-19, a falling dollar and sharp declines in risk assets. But the rise in the dollar and Treasury yields caused gold prices to quickly fall below 1820 and even below the 200-day moving average, the biggest drop in nearly two months, as shown below: 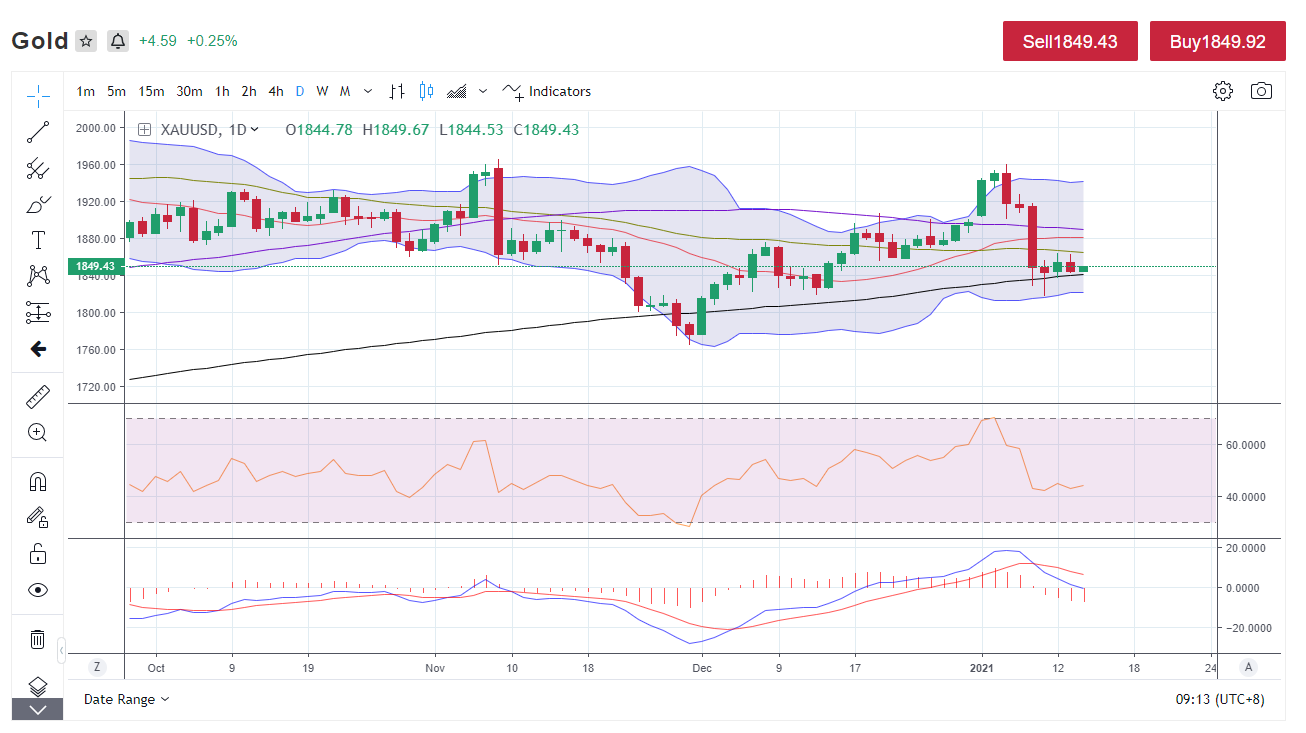 Based on the Bollinger Bands, gold prices find support at the point where they hit the lower Bollinger bands, which may indicate that investors are aware of the bullish factors in the gold market or are hunting for the bottom. On top of that, the relative strength indicator (RSI) showed gold had just hit overbought territory before falling back quickly, with some gold bulls taking profits and withdrawing from the market. However, rising inflation expectations and a prolonged period of low interest rates due to massive economic stimulus will provide a boost to the gold market. Going forward, near-term resistance for gold is possible to be seen at 1880, 1900 and 1950, while support is possible to be seen at 1816, 1800 and 1764.

All told, while rising U.S. Treasury yields, positive economic expectations and a settled election have given gold bears the upper hand for the time being, the inevitable rising inflation expectations, a slow economic recovery, and the conflict resulting from viral mutation should still provide long-term support for gold prices. As a result, the fierce battle between bulls and bears is likely to continue for a long time until the global pandemic is contained and the economy returns to normal, leading to another bout of volatility in the gold market. Investors can focus on the economic recovery and the fundamentals of Fed policy, while paying attention to technical resistance and support levels, and then they may take advantage of more wave opportunities in the gold market.