Are commodities poised for a bull market with a strong recovery in demand?

Abstract: Commodities are poised for a long-lost bull market due to rising inflation expectations. Prices of raw materials for manufacturing, energy products, and crops such as coffee, sugar and corn have soared this year. Institutional investors have piled back into commodity assets and the focus is on whether commodity prices can continue their rally. What is underpinning such a hot commodity market? And what investment opportunities should investors look for against a backdrop of stronger inflation expectations?

Global economic reopening and record government spending & quantitative easing were fueling a strong recovery in demand for commodities. Many commodities, on the other hand, were in short supply during the pandemic. Commodity prices soared as a result. Some base metals, for example, have surged to their highest levels in years, and crude oil was hitting its highest level since 2018. Many believe the commodities market is at its most optimistic in years, as a surge in inflation fears has prompted investors to add commodities to their portfolios as a hedge against the rising price level. In this case, has the "commodity supercycle" proposed by large institutional investors arrived? How long will the commodity mania last? What are the other factors behind the soaring commodity prices?

As illustrated above, the surge in the break-even inflation rates means that the expectations of future inflation are steadily rising. On top of that, the April non-farm payrolls data cast doubt on the strong recovery that previous economic indicators had pointed to, and reinforced the Fed's stance on maintaining quantitative easing. The Fed has made it clear that it wants inflation to stay above 2% for some time, and ultra-loose monetary policy is helping the government achieve its reflation goal. The dollar, on the other hand, is likely to weaken further as inflation expectations rise, fueling a surge in demand for dollar-denominated commodities. This is also a major reason for investors to hold commodities as a hedge against inflation.

Not only that, but the disappointing employment numbers may help tilt negotiations in the House and Senate over the $2.3 trillion infrastructure bill Biden unveiled last month. As a result, this massive fiscal stimulus, along with investments in infrastructure and clean energy, will drive demand for commodities even higher. A revival in global manufacturing activity and improvements in supply chains will lead to a rapid rebound in pent-up consumer demand as more and more countries emerge from the COVID-19 damage to their economies. Therefore, these will be important factors in rising commodity prices.

What are the noteworthy commodity markets in an inflationary environment?

1. Copper prices are rising strongly. Demand for copper, a base metal, has surged on the back of accelerated vaccinations and the reopening of the world's big economies. In addition, copper plays a key role in many countries' clean-energy initiatives, so investors are betting on future demand for the metal, sending its prices sharply higher. Electric cars, for example, require four times as much copper as conventional vehicles, and their charging piles also need a lot of copper. As a result, the price of copper briefly broke $10,000 a tonne and peaked at $10,714, the highest level in nearly 10 years, as shown below: 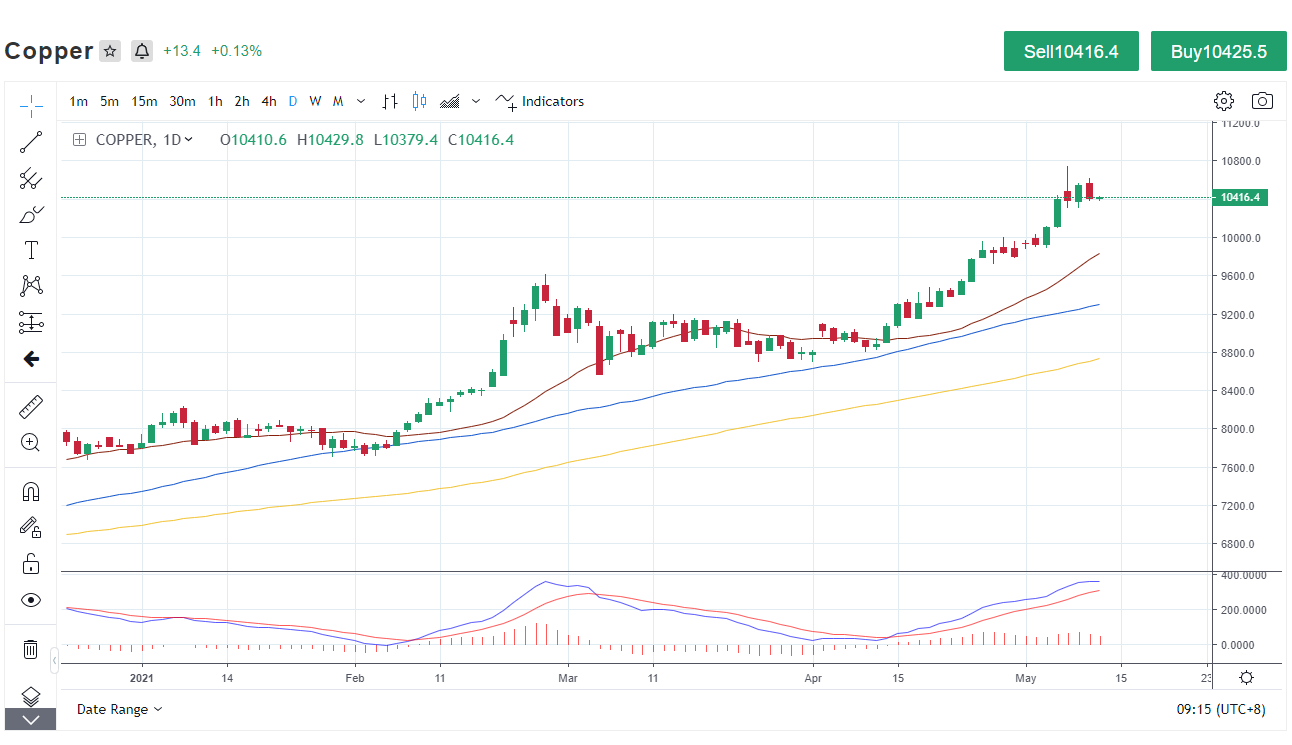 The major financial institutions have raised copper price expectations. Goldman Sachs said copper will be the "new crude" in the future and could climb to $11,000 a tonne in the next 12 months and $15,000 by 2025. Also, Bank of America delivered a similar forecast. They believe copper prices could climb to $13, 000 a tonne in the next few years due to a supply gap in the copper market. Therefore, copper presents an obvious upward trend in the long term, supported by the solid fundamentals. But in the short term, investors should be careful with the price fluctuation at a high level.

2. Most commodity prices are hitting multi-year highs. A strong rebound in the U.S. economy boosted demand for metals, food and energy products, while bad weather and transportation bottlenecks crimped supply, according to Bloomberg. That has pushed the Bloomberg Commodity Spot Index, which tracks prices of 23 raw materials, to its highest level since 2011. Commodities including crude oil, aluminium and iron ore were also at their highest levels in years. In addition to the United States, China, the world's second-largest economy, is also picking up speed, and Europe may see a full economic reopening soon, thanks to accelerated vaccination in the region. Thus, strong recovery in these countries, as well as government fiscal stimulus and economic policies will support the bull market of commodities in the long run.

All told, stronger inflation expectations have made commodities a hedge for investors against inflation and a weaker dollar. The governments’ massive fiscal spending plans will further push commodity prices higher, and large capital inflows into mining and commodity strategy funds in recent months reflect investors' growing enthusiasm for commodities. However, it is important to note that as commodity prices continue to rise and speculation increases, commodity price movements will depend not only on fundamentals, but also on sentiment and other factors. Therefore, price volatility may increase in the future.