Abstract: While the dust settled after the election results, the U.S. stock rally has not abated. As the dollar crumbles, gold's fortunes change. The oil market is under siege and crude oil prices are at stake. The pincer attack of Brexit talks and the COVID-19 has left the pound struggling. The Australian dollar was slightly choppy against the U.S. dollar after the Reserve Bank of Australia cut interest rates as scheduled. 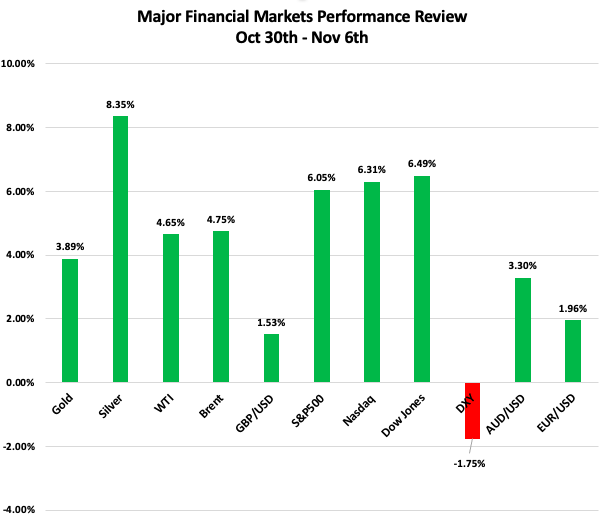 Last week's U.S. election was the decisive factor in financial markets, and the tight race has investors on thin ice. U.S. stocks were already in rallying mode before the Election Day. Optimism about an outcome in the 2020 U.S. election led to a reversal of the previous downward trend in U.S. stocks. Then, a surge in U.S. tech stocks that helped lift the broader stock market got its driving force from the inversion that Michigan flipped from red to blue and Biden had an upper hand. At last Friday's close, the S&P 500, Nasdaq and Dow were up 6.05%, 6.13% and 6.49%, respectively, at 3510.45, 11890.93 and 28390.18. See real-time Nasdaq100 price below:

A closer look directly links the rally to market speculation about the new President and the ruling party. For one thing, if Mr. Biden is elected, Democrats are likely to blunt the negative effects of “monopoly power" on big tech companies. For the other thing, the American establishment may not be dominated by a single party. In addition, last week's decision on interest rates from the Federal Reserve continued its dovish stance, keeping interest rates near zero and leaving its asset purchase program unchanged, while reaffirming the need for more fiscal and monetary policy support for the U.S. economy. The October non-farm payrolls report, which added 638,000 jobs and fell the unemployment rate to 6.9% from 7.9%, beat market expectations. Looking forward, U.S. stocks may still be tilted to the upside, but they may be rattled in the short term by Trump's displeasure and skepticism about the outcome of the election. But despite Mr. Trump's refusal to accept Mr. Biden's victory, the election will come to an end, it will bring a deal on the new stimulus package closer, and on the back of that, U.S. stocks will be largely higher in the long run.

This week, investors should continue to keep an eye on the outcome of the U.S. election, with the Trump campaign likely to pursue legal action and possibly recount the votes despite Biden's victory. Moreover, the two measures of U.S. inflation, CPI and PPI, due to be released this week, may give some indication of whether the U.S. inflation is moving in the direction the Fed expects.

The dollar and gold were in deep swings last week. At the beginning of last week, the U.S. Dollar Index surged to 94.285 on the Election Day due to an election-stimulated sharp rise in risk aversion. The dollar subsequently fell sharply on expectations that the election result would become clear, sending the U.S. Dollar Index down to 93.29. However, it rose again as Mr. Trump filed a lawsuit in U.S. courts over the validity of ballot papers. Still, that doesn't offset the market's pessimism that the Fed's dovish stance and the timing of the election could lead to a deal on the stimulus package as soon as possible. On Thursday, the dollar suffered a brutal sell-off, falling below 93 again. At Friday’s close, the U.S. Dollar Index was fell by 1.75% to 92.24.

On the gold side, its performance last week was impressive. The metal bounced back from a tumble early as a result of various reversals in the election campaign. Particularly on Thursday, it rose as high as 1960.33 after soaring above a key 1950 resistance level. It has been associated with the election and the recent worsening of the virus in the country. Gold ended Friday at 1950.98, up 3.89% for the week. See real-time gold price:

U.S. crude and Brent crude tumbled more than 5% to a daily low of $33.67 and $35.76 a barrel last Monday, as market panic over the U.S. election and tougher blockade by European countries reduced demand for crude oil. The v-shaped rally was boosted by news that Russia mulls option of delaying OPEC+ cuts taper by 3 months and positive aspects on crude inventories. Crude stocks recorded unexpected drops of 8.01 million barrels and 7.998 million barrels respectively last week, significantly better than market expectations, according to data from the EIA and the API. U.S. crude and Brent crude rose sharply after the data. Another major factor contributing to the drop was a reduction in U.S. crude production of about 600,000 b/d due to Hurricane Zeta. At Friday’s close, U.S. crude traded at $37.38 a barrel and Brent at $39.66, up 4.65% and 4.75% for the week, respectively.

The outlook for crude oil looks grim, so investors should pay attention to the following risks:

2. Joe Biden's victory in the election, followed by talk of his push for clean energy and a "move away from fossil fuels," could prompt investors to become more bearish about oil markets.

4. Further blockages are being imposed in Europe, so demand for crude oil will be even weaker.

Hit hard by the pandemic, BOA has scaled up its quantitative approach

Last week, the Bank of England made a big decision on interest rates. The decision broke with the cliches of the past and the Bank of England has embarked on a dramatic expansion of its quantitative easing programme. It decided to add a further £150 billion to its bond buying programme, citing the second wave of the COVID-19 pandemic as a serious threat to UK GDP in the fourth quarter. The BOE also said it expected Britain's economy would shrink by 11% in 2020, more severe than the 9.5% contraction it forecast in August. Sterling was slightly higher against the U.S. dollar after the decision as it left rates unchanged at 0.1% rather than using negative rates. At Friday's close, GBP/USD traded at 1.3148, up 1.53% on the week.

In the Brexit negotiations, the EU and Britain's top Brexit negotiators warned last week that they were far apart after 14 days of tense round-the-clock discussions failed to produce a breakthrough. However, with only a week or so to go before the agreed deadline, a deal will depend on the final round of talks on future trade and security ties that begin in London this week, which could usher in another volatile session for the pound.

The RBA's decision last week raised its main rates, yield curve target and bank lending facility to 0.10% from 0.25%, as most economists had expected. Meanwhile, the RBA said it would buy A$100 billion ($70.4 billion) of government bonds with maturities of around five to 10 years over the next six months. The RBA Governor Philip Lowe believed a combination of low interest rates and bond purchases could help the Australian economy recover. The decision may also indicate that the RBA may not wish to see further appreciation of the Australian dollar while novel Coronavirus is raging. But it made clear that there would be little benefit to moving to negative rates and it has been not considering further cuts. The Australian dollar came under pressure and fell slightly against the U.S. dollar during this statement. Meanwhile, a weaker dollar and surging U.S. stocks have boosted risk appetite. Last week, the Australian dollar edged as high as 0.73 from the previous 0.70. At Friday’s close, it traded at 0.72588, up 3.3% for the week.

In addition, the RBA forecast Australia's GDP for the coming year, with the figure expected to grow by around 6% by June 2021 and 4% by 2022. The unemployment rate was estimated to fall from 10% to 8%. There are signs that, with the pandemic under steady control in Australia, the economic recovery seems ready to get back on track. But in an interview with the Guardian on Friday, Steven Kennedy, Australian Treasury minister, also expressed concern that a strong fiscal stimulus was needed or the recovery could run into headwinds.

Last One With recent unfavorable news,is gold and silver deep in trouble?
Next One Oil Uptrend is observed. What drove the oil price to go up?
Latest Release
Popular Reading