Abstract: Is "the rebalancing of supply and demand" making oil prices inexorably higher? The U.S. stock market is booming, and the three indices are soaring. Treasury yields soared while gold and silver tumbled. Aussie fell as RBA continued quantitative easing. GBP momentum on the upside is unabated, but potential risks need to be guarded. 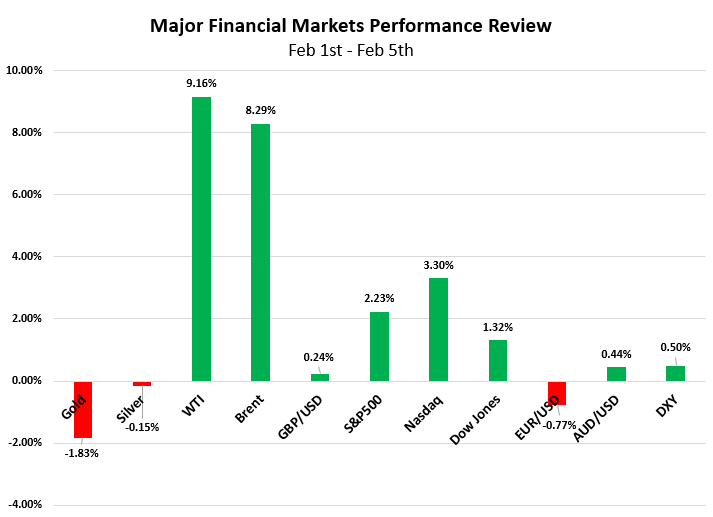 Last week, crude oil prices rose sharply, even to their highest level in the past year as global supplies tightened. API and EIA inventories recorded declines of more than 4.26 million barrels and 994,000 barrels, respectively. Meanwhile, the OPEC+ Joint Ministerial Oversight Committee (JMMC) was held as scheduled last week. Instead of discussing disagreement, the members looked ahead to the oil market and explored compensation timetables for producers that have not fully complied with the production cut. OPEC+ countries have advocated reversing the supply glut by mid-2021, and expressed optimism about a recovery in 2021 at this meeting, adding momentum to oil prices. WTI crude extended gains to 2.9% after the meeting, breaking above $56 / BBL, while Brent crude edged closer to the $60 mark. At last week's close, U.S. crude and Brent crude traded at 56.95 and 59.56, respectively, up 9.16% and 8.29%. See WTI crude live-chart below:

In addition, the high compliance rate of OPEC+ production cuts and the strong rise of the stock have also been the direct reasons for the surge in crude oil prices. Despite the current euphoria, the short-term impact of the COVID-19 on oil demand may still be a limit on the continuation of the oil rally, so investors should be wary of a pullback after the rally.

The three U.S. stock indexes were back at all-time highs last week. As the hot "short squeeze" came to an end, the market anxiety was calmed down, a good start to the week for U.S. stocks. The Senate and House of Representatives voted to pass the budget bill, making it more likely that Joe Biden's $1.9 trillion economic bailout will pass without Republican support, clearing the way for the stimulus bill to become law and consequently sending U.S. stocks sharply higher. Coupled with the fact that last week the number of people vaccinated in the U.S. exceeded the number infected for the first time, market sentiment was buoyed. In terms of economic data, there was some positive data from the U.S. economy, with the manufacturing and services PMI readings of 58.7 and 55.2 respectively, reflecting a further economy recovery after the turnaround in the COVID-19. Separately, the unemployment rate fell to 6.3% in January, the lowest since the outbreak of the virus, despite a lower-than-expected 49,000 increase in U.S. nonfarm payrolls. Yields on 10-year and 30-year Treasury bonds hit their highest levels in nearly a year on improving U.S. jobs data and a gradual decline in new cases and deaths. At last week's close, the S&P 500, Nasdaq and Dow were at 3871.74, 13777.74 and 31005.86, respectively, up 2.23%, 3.30% and 1.32% for the week. See S&P500 live chart below:

This week, the CPI will be released. The data is worth watching as the prospect of more fiscal stimulus raises the possibility of reflation.

1. The United States is the world leader in vaccination.

2. The strength of the US economic recovery has pushed US bond yields higher.

By the end of the week, DXY closed at 91.004, up 0.50% for the week. Gold, by contrast, has been losing ground. Silver prices surged to an eight-year high and gold briefly topped $1,870 an ounce early last week as retail investors continued to flood the market. However, gold took a beating as silver pared its gains after retail investors miscalculated or conspiracy behind the WSB failed to push "short squeeze". On top of that, gold briefly fell below 1790, its lowest level since early December, as the House and Senate voted to pass a budget resolution, sending Treasury yields higher. At the end of last week, gold was trading at $1,812.98 an ounce, down 1.83% for the week.

Going forward, its momentum may remain weak. On the one hand, confidence in the economic outlook has been restored by a gradual increase in the pace of vaccination. On the other hand, if Biden's massive economic stimulus is brought into law soon, Treasury yields could continue to rise and investors could add to their holdings of Treasuries as a risk-free investment, while gold could fall out of favor.

Aussie was under pressure as Australia extended QE

Last week, the RBA said it would extend its quantitative easing program by a further A$100 bn ($76.2 bn) and doesn't expect to increase interest rates until 2024. The Aussie fell as low as 0.753, the lowest level in nearly two months, on the back of currency and interest rate policy. Analysts said the RBA's decision to align monetary policy with other central banks was based on concerns that Australia, as a resource exporter, would suffer if the Australian dollar rose. However, Australia's balance of goods and services released by the Australian Bureau of Statistics last week showed that Australia's trade and service surplus in 2020 was 72.7 bn Australian dollars, an increase of 5.2bn Australian dollars compared with the data in 2019. It was mainly because Australia's import significantly decreased compared with its export last year. By the end of the week, the Australian dollar was at 0.76748, up 0.44% on the week. By technical analysis, the Australian dollar has rebounded sharply on Friday, supported by the 50-day moving average, after falling below the 20-day moving average on January 27. On the MACD, the blue line reversed when it hit negative territory, which could signal a temporary end of the downtrend for the currency.

Last week, the BOE left its interest rates on hold at 0.1% and asset purchases unchanged at 895bn pounds. It also pushed its bets on negative UK interest rates out to February 2022 from August this year. Yields on 10 - and 30-year government bonds climbed to their highest levels since March on optimism from the central bank about the pace of UK vaccinations and news that negative interest rates had once again been shelved. As a result, GBP/USD moved up more than 70 points in the short term. By the end of the week, sterling was at 1.3732 against the dollar, up 0.24%. More recently, GBP has strengthened as investors bet that the UK's economic recovery will accelerate as a result of accelerated vaccination. The pound was trading as high as $1.37, a two-year high. While sterling remains bullish at the moment, investors need to be aware of the risks posed by uncertainty over the UK's relationship with the EU. This week, UK GDP figures will be released, and the UK reported a 2.6% contraction for November, the first decline since the outbreak of the pandemic last April, so it will be interesting to see if the figures improve.

Last One With recent unfavorable news,is gold and silver deep in trouble?
Next One Risk-taking Mood Soars: will the downward trend continue for gold?
Latest Release
Popular Reading