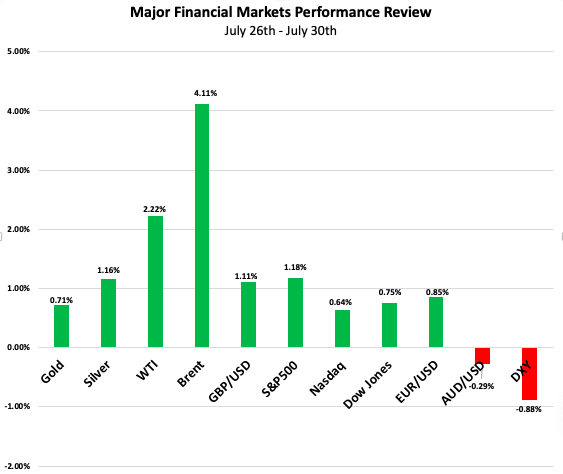 On the economic front, U.S. GDP grew at a 6.5% annual rate in the second quarter due to supply chain bottlenecks, slightly better than the first quarter but less than market expectations. On top of that, U.S. initial jobless claims for the week ended July 24 came in at 400,000, above market expectations of 380,000. While the U.S. economy and jobs recovery made progress, their outlook remains uncertain. This week, the U.S. non-farm payrolls data for July will be released. Investors should be watch to see if the numbers are hit by a rise in COVID-19 cases in the United States, after the unemployment rate unexpectedly rose to 5.9% despite the 850,000 jump in June's non-farm payrolls.

Gold continued to hover around the 1,800 mark at the start of the week as markets awaited the Fed’s meeting. Later, Fed Chairman Jerome Powell said the economy had made progress toward its goals, but the recent outbreak of the virus left the outlook at risk. Mr. Powell also stressed that the current high inflation is only temporary and that will be pushed to the 2% target in the long term. Gold prices rose strongly after the meeting and briefly stood above $1,820 an ounce. At the end of last week, gold went up by 0.71% to $1814.15 an ounce. Although the Fed's delay in tapering its asset purchases could push gold higher in the short term, the metal might be subject to a potential risk in the long term as the central bank did not specify the "substantial progress" made in quantitative easing and the downside risks posed by the virus to pressure the tapering schedule.

On the dollar side, a sharp drop in U.S. bond yields and another dovish tone from the Fed sent the U.S. dollar index down, briefly breaking 92.5, its lowest level in nearly a week. At the end of last week, the U.S. dollar index was at 92.02, down 0.88% for the week. Going forward, the dollar's rally could be reversed as risk aversion declined and the Fed showed no intention of tapering in the near term.

Last week, crude oil prices continued to strengthen after a V-shaped rally. Global inventories were expected to tighten as major energy consumption countries were recovering from the pandemic, despite the recent outbreak may impact on short-term oil demand. However, investors are still assessing the impact on the oil market of restrictions reimposed in some areas as a result of the rapidly spreading Delta variant. The grapple between oil bears and bulls limited price rise. In addition, last week's API and EIA crude oil inventory data recorded steep declines of 4.728m b/d and 4.089m b/d, significantly lower than market expectations. This suggested oil demand in summer remained strong to offset the threat to oil demand from the surge in new cases in the United States. U.S. crude and Brent crude were steady near two-week highs after the data, and then ended the week at $73.66/barrel and $75.16/barrel, up 2.22% and 4.11%. See U.S. crude oil live chart below:

It followed reports that many U.S. airlines were experiencing fuel shortages at smaller airports. Brent crude futures, on the other hand, were in backwardation, meaning demand still appears to be tight, so prices may still have upside potential.

Last week, Australia's CPI rose by 0.8% in the second quarter from the previous quarter, the fastest annual rise in nearly 13 years, slightly ahead of market expectations of 0.7%, thanks to higher energy prices and lower government subsidies. But a modest rise in the core CPI seemed to suggest the rapid rise in inflation may be short-lived. Short-term AUD/USD fell after the data was released and closed last week at 0.7343, down 0.29% on the week. On top of that, the extension of lockdown in several areas, including Sydney, for at least four more weeks could prompt a sharp contraction in the economy next quarter. As a result, the RBA is likely to maintain its ultra-loose monetary policy to meet its target range between 2% and 3%. This week, Australia's interest rate decision and monetary policy statement will be released. Market sources suggest the RBA may reverse its previous decision to cut its bond-buying program at this meeting, as the lockdown in parts of Australia could hamper the economy. Separately, Australian retail sales data due out this week may be disappointing due to the spread of the virus, so Australian dollar could be further volatile.

Bitcoin surged above $40,000 last week for the first time in nearly six weeks after a 10-day rally on growing bullish sentiment. The move came after Tesla CEO Elon Musk said the company might likely resume accepting bitcoin as bitcoin mining is shifting to renewable energy. Amazon dispelled the rumor that it was looking to accept bitcoin payments this year, but the company is seeking a digital currency and blockchain expert for its payments team, meaning it may be looking more closely at Bitcoin and other cryptocurrencies. Not only that, but the increase in bitcoin trading volume on major digital currency exchanges seemed to indicate that retail investors started to pour back into cryptocurrencies. If the price of bitcoin continues to rise, then bitcoin bears may exit their positions, which could further stoke speculative enthusiasm.