The US election Countdown: How to deal with market volatility?

Abstract: In the countdown to the U.S. presidential election, how will financial markets fluctuate? U.S. stocks, forex market and gold suffered as hopes of a pre-election stimulus deal evaporated. Are investors prepared for these impacts? 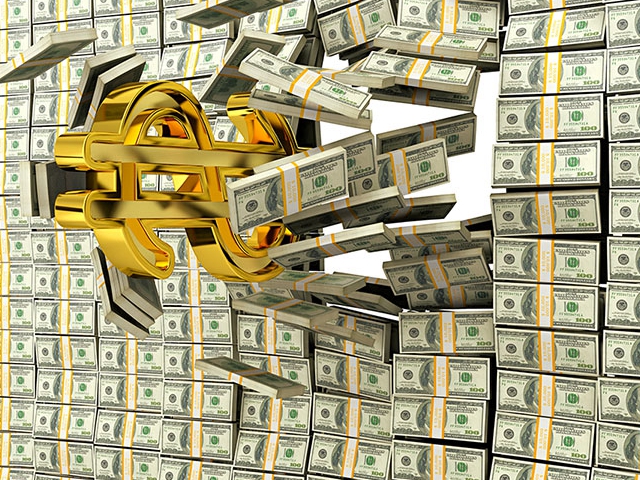 Thursday's final debate between President Donald Trump and challenger Joe Biden has drawn the U.S. election to a close. Despite an overwhelming "Blue Wave", the winner of this election is beyond prediction, considering the 2016 election was is a completely opposite outcome from the polls. Democrats were seething over the Republican appointment of Amy Coney Barrett, the conservative Supreme Court justice, leading to rising tensions between the two parties, and it is unclear whether Mr Trump will peacefully hand over power as scheduled if he loses. Therefore, financial markets will be more sensitive to the outcome of the election. In addition, a host of long-simmering issues such as the prevention and control of the pandemic and economic recovery have resurfaced, and seemingly calm markets seem to be waiting for the next black swan. How will U.S. stocks, forex market and commodities react to the US election? What should investors do in advance?

As the election approaches, fear is rising in U.S. markets

After trying to get close to the record highs seen before September's precipitous drop, the U.S. stocks have been trending down again. In addition to the election, the latest number of new infections, which hit another record high, also weighed on the U.S. stocks. According to CNN, a new daily record of 68,767 cases on a seven-day average broke the previous record of 67,293 reported on July 22. The number of people hospitalized with the infection has also reached its highest level in two months, putting enormous strain on health systems in some states. At the same time, investors who had been hoping for a deal in the economic stimulus package were re-dampened by the stalemate in the negotiations. U.S. stocks had their worst day since June on Oct. 28, thanks to a triple whammy of the election, the COVID-19 pandemic and the economic aid package. Even before then, however, the market seemed to have sent an early signal of anxiety, as shown below: 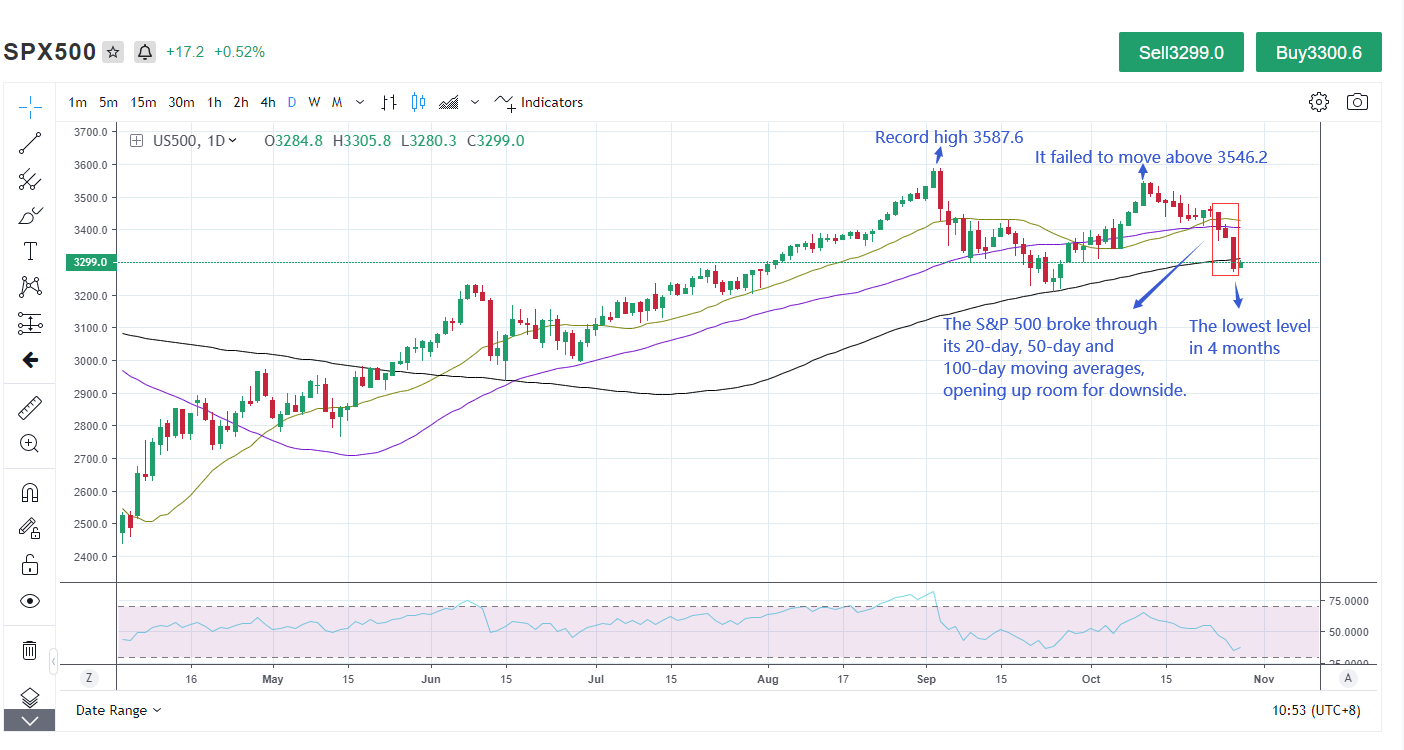 The S&P 500 has ended down for nearly two weeks, except for one day when bank stocks of the third quarter posted a surge in earnings on the back of higher Treasury yields, helping the S&P 500 close the day higher. On the stock market, the S&P 500 stopped at 3549 and failed to reach its all-time high of 3587. Then, it is facing a significant decline, with the frequent spread of pessimistic news and the deepening anxiety of market bulls. Going forward, the S&P 500 resistance will likely be at 3470 and 3549, while its support will likely be at 3209, 3200 and 3149. Trade Now>>

Due to the uncertain outcome of the U.S. election, the afternoon market may move as below:

1. If Trump serves consecutive terms, U.S. stocks are likely to be supported both in the short term and the long term. However, it is worth noting that after Trump was infected with the coronavirus, his campaign team kept making misleading statements that the virus was just "flu" in order to achieve his political purpose, which would hinder the American people from fighting against the virus.

2. U.S. stocks could see a short-term rally if Democratic Joe Biden is elected, because Democrats have been pushing for a larger economic aid package, and the bigger the aid, the more powerful it could be for U.S. stocks. But tax changes Biden announced during his campaign could keep a lid on stocks' gains for a long time.

3. Of course, in another case that the election has no outcome, the validity of the polls is controversial, and then the U.S. Supreme Court will rule on it. The consequently intensified political uncertainty may have a negative impact on the sensitive stock market.

Can gold see a rally after election outcome?

In the past two weeks, gold prices have mirrored the market's reliance on the new stimulus package, and the dollar has become more negatively correlated with gold. The chances of a deal on the checkered package before the election are virtually nil, sending the metal back above 93 from its previous low. Also, the U.S. dollar index (DXY) regained short-term support on the extension of the package to compete with gold, while gold could be pushed higher by another wave of the pandemic and uncertainty over the outcome of the election.

From a technical analysis, gold's trend is not optimistic. Gold moved in a downward trend after forming dead crossings on September 23, then edged higher on support from its 100-day moving average and now trades within a range from 1934 to 1869. In October, the metal made two attempts to rally to 1933 and 1931, but both were thwarted by negative news about the stimulus package. As a result, the resistance level around 1930 created a significant downward pressure on gold's upward movement. It's worth to remind that gold broken 100-day moving average now because of the rebound of US dollar, which means more downward risk is coming. However, if gold bulls try to break through 1935, then gold is more likely to trend higher. Its intermediate resistance level will probably be around 1960 and the support levels could be around 1850 considering so much uncertainty in the market that if gold moves lower.

1. EURO/USD has been a standout this year, breaking through 1.20 on September 1 and hitting a nearly two-year high. However, the euro fell as low as 1.17 against the dollar in the last two weeks as a result of the dollar's short-term strength and the virus spread in the European region. In addition, as Europe's economic blockade tightens, market fears about Europe's economic recovery grow, forcing the ECB to adopt higher-level quantitative easing. But if the stimulus package arrives, the dollar could be weak, which could offset the negative impact of the ECB's liquidity boost. 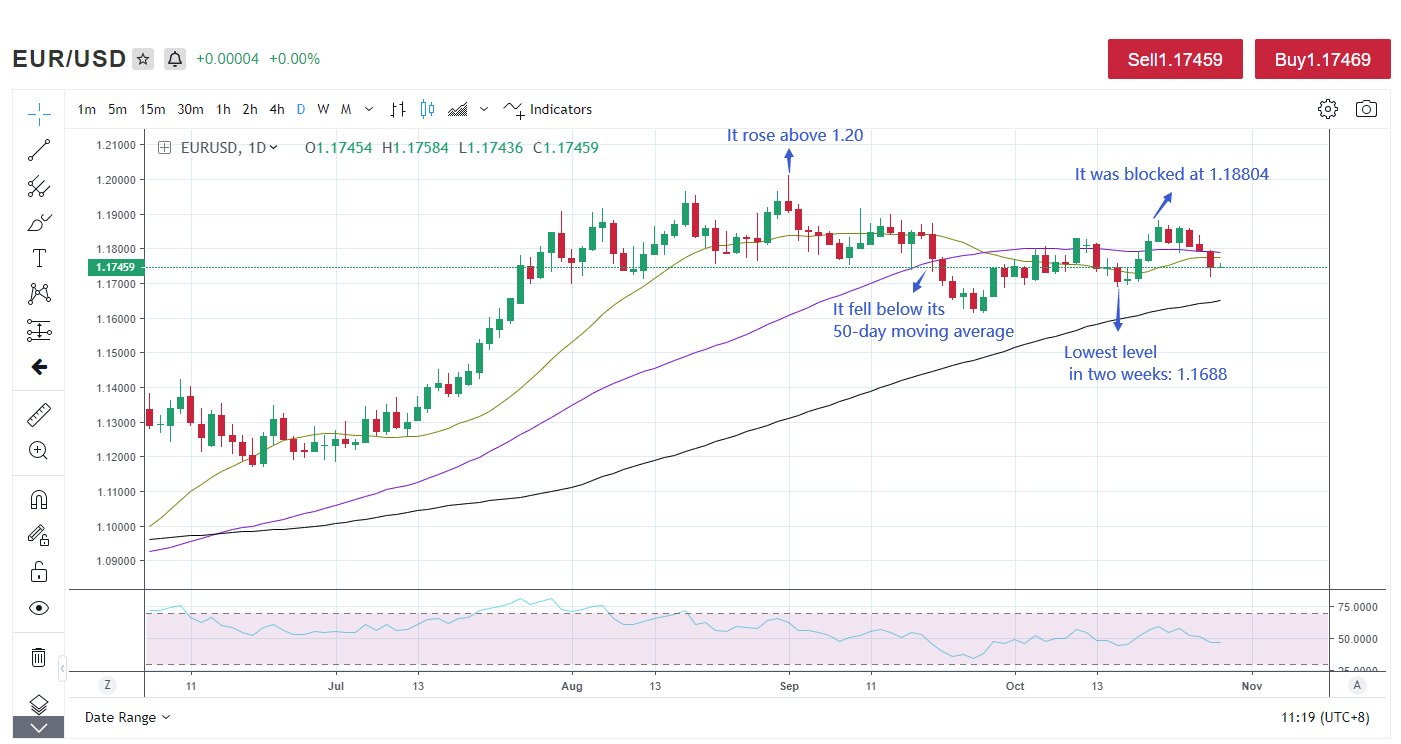 2. The Australian dollar has been on a par with the euro this year. After hitting a nearly two-year high at 0.74132 on August 31, it has shown a clear downward trend. On the one hand, the Australian dollar, as a risk barometer, moves in a significant downward trend due to increased risk aversion by factors such as the U.S. election and the spread of the pandemic worldwide. On the other hand, comments from the RBA in October that it might cut interest rates further added to the bearish sentiment. 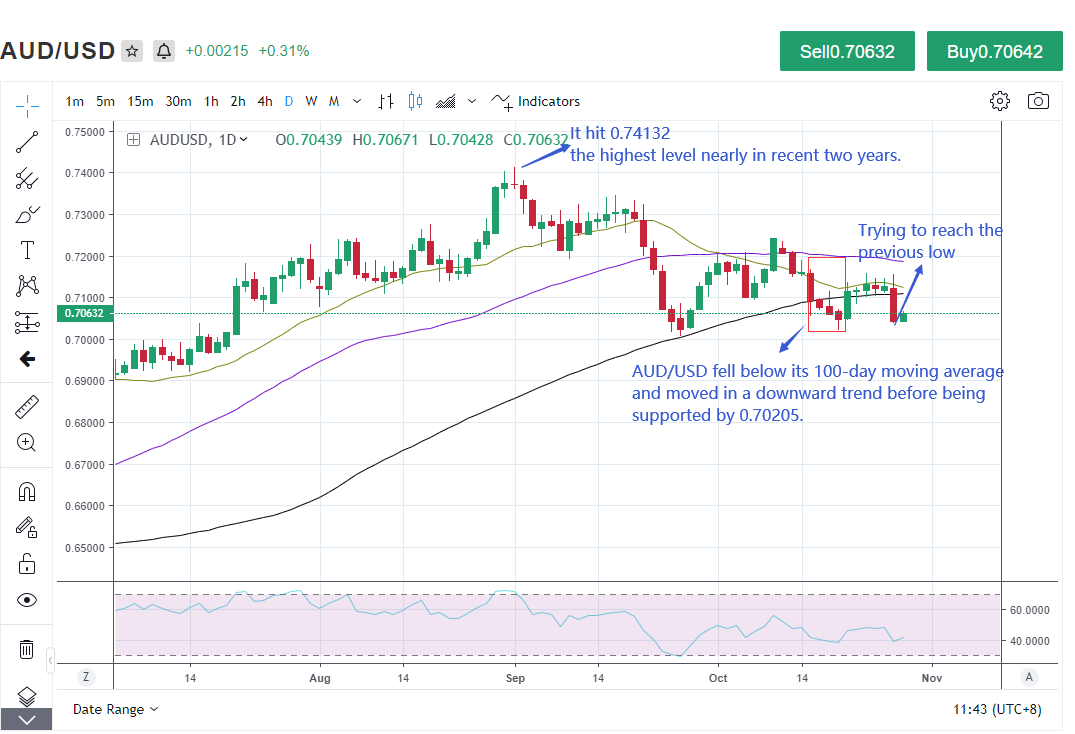 On a technical level, the Australian dollar fell to 0.70205, its lowest level in nearly a month, after breaking below its 100-day moving average on October 15. Subsequently supported by this level, it broke above its 20-day moving average. Conversely, the AUD/USD has fallen below the 100-day moving average and is trying to reach the previous low at this time. In addition, it seems that the market is awaiting instructions from the RBA, in order to make further decision.  In the short term, AUD/USD resistance levels will be at 0.71578, 0.71903 and 0.72426, while the support levels may be at 0.70205 and 0.70056.

To sum up, the long-term economic uncertainty is likely to continue the tortuous course of the U.S. stocks, forex market and commodities. And with the final answer to the U.S. election looming, the likelihood of more market volatility has risen, adding more trading opportunities. Therefore, investors should take precautions, carefully evaluate investment risks, and make investment layout in advance.