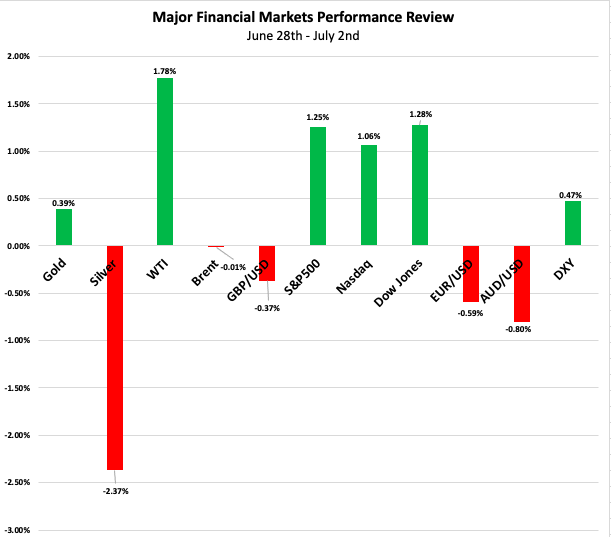 Crude oil prices fell off their highs early last week as the Delta variant spread through Asia and Europe. But prices reversed course after API and EIA crude inventories recorded steeper declines of 8.153 million barrels and 6.178 million barrels, both far larger than market expectations.  Additionally, OPEC+ was close to a deal to increase output by 400,000 b/d from August to December and extend the expiration date of its production cuts from April to December. But the deal was unexpectedly blocked by opposition from the United Arab Emirates. U.S. crude and Brent crude rose to $76.2/ BBL and $76.71/ BBL after the meeting, their highest levels in nearly three years. At the close of the week, U.S. crude rose by 1.78% to $75.1 / BBL while Brent crude edged down 0.01% to $76.11 / BBL. On top of that, the analysts from Goldman Sachs said the oil market would be 5 million b/d short deficit by 2021 as demand increases by 2.2 million b/d in the second half of this year. As a result, many investors are predicting future supply shortages, which could push oil prices higher, although the renewed wave of the Delta variant has dented market optimism.

U.S. stocks had a record half-year as the economic recovery continued to strengthen

Last week, U.S. stocks hit another all-time high. While investors had worried about overvalued U.S. stocks because of inflation, a steadily recovering economy eased concerns about market uncertainty. And the U.S. manufacturing purchasing managers' index (PMI) for June posted 60.6%, indicating that U.S. manufacturing activity continued to expand in June and the overall economy grew for the 13th consecutive month. Despite the positive economic data, U.S. jobs data were mixed. Payrolls jumped 850,000 in June, but the unemployment rate rose to 5.9% from 5.7%. As of last week's close, the S&P 500, Nasdaq and Dow traded at 4,319.94, 14,522.38 and 34,633.53, respectively, up 1.25%, 1.06% and 1.28% for the week. See S&P500 chart below:

Remarkably, the first half of the year was one of the best for the U.S. stock market since 1998. Still, the potential for the Delta variant to undermine the economic recovery and rising inflation fears remain significant risks for the U.S. stock market, so stronger economic growth will bring more volatility while pushing stock prices higher. The minutes of the Federal Reserve (Fed) meeting will be released this week and investors should watch for Fed officials' views on tightening quantitative easing and outlook for the economy and inflation, after the Fed sent an unexpectedly hawkish signal at its rate-decision meeting.

Gold's appeal was undermined by rising risk aversion as a result of the Delta variant, which made the dollar the preferred safe haven for investors. Not only that, but Fed officials sounded hawkish again last week, arguing that the economy was performing well enough to consider withdrawing some of its stimulus package. Investors reduced their holdings of gold ETFs, pushing gold prices down sharply to $1,750 an ounce. Gold ended last week at $1787.3 an ounce, up 0.39% for the week. According to Bloomberg, the upcoming tapering of asset purchases by the Fed would pose downside risks to the gold market, with gold prices likely to fall below $1,700 an ounce in the next six months.

The U.S. dollar index (DXY), on the other hand, pierced the sideways band last week to rise as high as 92.448, the highest level since April. At the close of the week, the DXY traded at 92.243, up 0.43% for the week. And the bullish sentiment towards the dollar was further fueled by the expectation of many market participants that the Fed would probably tighten quantitative easing in the fourth quarter of this year.

The euro depreciated after inflation fell short of expectations

Last week saw the release of eye-catching consumer price index (CPI) data for the Eurozone. In contrast to rising inflation in the United States and the United Kingdom, the Eurozone CPI fell to 1.9% in June from 2% in the previous month, the data showed. Core CPI in the Eurozone also fell by 0.1% to 0.9%. This suggested that the weak eurozone CPI data could be an important support for the European Central Bank (ECB) to continue its ultra-loose monetary policy. In addition, the European consumer confidence index jumped to 117.9 in June from 114.5 in May, putting it above its long-term average for the fourth month in a row and hitting a 21-year high. And Eurozone manufacturing PMI came in at 63.4 in June, higher than market expectations and another record high. However, the new wave of the Delta variant in Europe cast a shadow over the region's economic recovery, prompting a four-day slide in the euro against the dollar in the week. At the close of last week, the currency pair dropped by 0.59% to 1.1862. Eurozone retail sales data for June will be released this week, after falling 3.1% month-on-month but rising 23.9% from a year earlier. Investors should watch for the data as it is a measure of consumer demand and a key factor in inflation trends.

Several parts of Australia, including Sydney, were put back on lockdown last week as the Delta variant continued to spread. Uncertainty about Australia's economic recovery has also weakened risk currency AUD, causing trouble for many investors who had been bullish on the currency as iron ore prices soared. Separately, China’s Caixin/Markit Manufacturing PMI came in at 51.3 for June, below market expectations and its lowest level in three months. Another disappointing data was Australia’s seasonally adjusted balance on goods and services surplus, which increased to AU$9.681 billion in May, missing estimate. AUD/USD stayed low after the data and ended the week at 0.7524, down 0.8%.

This week, the Reserve Bank of Australia (RBA) will announce its interest rate decision as scheduled. This came after RBA governor Philip Lowe had said the central bank would maintain its quantitative easing as wage growth and faster inflation were yet to emerge. It may bring the Australian dollar in turmoil if the RBA continues to release "dovish" comments at its rate-decision meeting as the virus worsens.