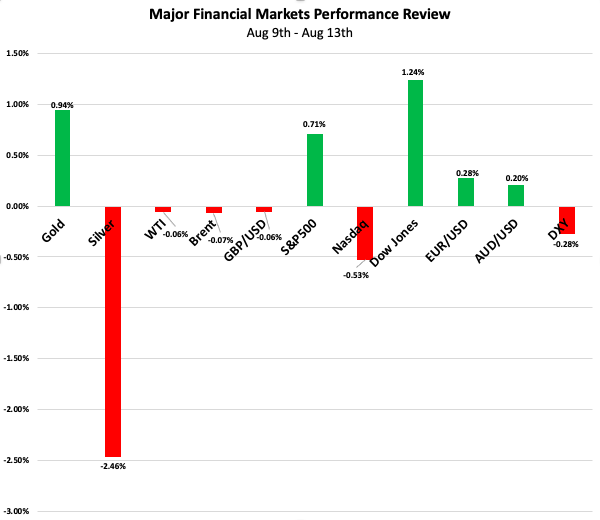 Bitcoin began trading last week above $46,000, its highest level in nearly three months. The strong rebound in Bitcoin prices has been dominated by two factors.

On the one hand, a bipartisan compromise in the U.S. Senate on including a cryptocurrency report in the $550 billion infrastructure bill and how to tax cryptocurrency assets temporarily eased market concerns that some cryptocurrency companies had previously faced $30 billion in taxes.

On the other hand, the return of optimism among cryptocurrency investors and the technically positive factors for Bitcoin supported the higher price.

Still, Bitcoin funds and futures are on track for a third straight month of outflows, the longest streak since 2014, according to Bloomberg, which means fund liquidity has not kept pace with the current rally in Bitcoin prices. Going forward, the optimism in the cryptocurrency market may continue to weigh on Bitcoin in the short term, despite the uncertainty surrounding cryptocurrency reporting and tax legislation in the United States.

U.S. stocks hit record highs last week as the market digested news that the Fed would taper sooner than expected and U.S. consumer price index (CPI) growth slowed in July. The CPI rose by 5.4% in July from a year earlier, the same as in June and the biggest increase since August 2008, as surging demand for travel and dinning out kept inflation high. But the core CPI edged up only 0.3% from the previous month, missing market expectations, which seemed to confirm the Fed's repeated assertions that inflation is only temporary, thus easing market inflation fears and providing a driving force for U.S. stocks to reach new highs. At the close of last week, the S&P 500 and Dow Jones ended at 4,460.38 and 35,499.85, up 0.71% and 1.24%, while the NASDAQ fell by 0.53% to 14,816.26. See S&P500 Chart below:

Although many in the market believe the inflation surge has peaked, U.S. producer price index (PPI) increased by a bigger-than-expected 7.8% in the 12 months to July, suggesting higher commodity costs and supply bottlenecks are still adding to inflation pressures on businesses. This week, the Fed Meeting Minutes will be released, when more clues may be provided to Fed chair Jerome Powell's comments that the central bank will maintain its easing policy until there is "substantial progress" in the U.S. economy. Mr Powell did not detail that progress, so investors should watch for the minutes.

At the beginning of last week, the price of crude oil continued to decline. U.S. crude and Brent crude dropped to their lowest levels in nearly two weeks as concerns about the outlook for oil demand grew amid the continuing spread of the highly contagious Delta variant. In the week, U.S. API and EIA crude oil inventory data recorded a decline of 816,000 barrels and 447,000 barrels, significantly lower than market expectations. The U.S. government was willing to call on OPEC+ to boost oil production in response to rising gasoline prices, which may further hurt crude prices. But crude oil prices rebounded after the U.S. Senate passed a $1 trillion infrastructure bill. On top of that, the International Energy Agency (IEA) and OPEC both left their forecasts for oil demand growth this year largely unchanged, but they expressed concerns about the grim virus situation. Crude oil prices slipped after the news. U.S. crude and Brent crude ended last week at $67.93 / barrel and $70.22 / barrel, down 0.06% and 0.07% on the week. Going forward, the oil market is likely to be more volatile as the virus continues to worsen and investors become more concerned about the uncertain outlook for oil demand.

Gold experienced a flash crash at the start of last week after strong U.S. jobs data sparked fears of an early tightening of quantitative easing by the Fed. In just a few minutes, the price of gold fell as much as $60 to hit $1,680 an ounce, its lowest level since late March. And the subsequent hawkish remarks by the Fed officials became the resistance to a rebound of the metal. But a slowdown in the U.S. CPI growth in July helped ease investors' concerns about rising inflation pressures, sending gold briefly back above $1,750 an ounce. Ultimately, gold finalized last week at $1779.22 an ounce, up 0.94% on the week.

On the other hand, the U.S. dollar index hit another two-week high of 93.19 last week on the back of strong U.S. jobs data and a hawkish stance on tapering by Fed officials. But the currency then retreated on the weaker-than-expected U.S, CPI data. At the close of last week, the U.S. dollar index was at 92.523, down 0.28% for the week. Going forward, investors' assessment of when the Fed will tighten its quantitative easing policy will continue to be the dominant factor for gold and the dollar, both of which will therefore be more volatile ahead of the Fed's monetary policy in September.

The economy grows strongly while the pound rose before falling

The pound gave up the gains it had made at the start of the week following the BOE's unexpectedly hawkish stance and continued to fall on the back of a stronger dollar. But it regained momentum after the release of the UK GDP data. The GDP data showed a better-than-expected rise in June, pushing the UK's GDP growth rate to 4.8% in the second quarter, close to the BOE's 5% forecast, as a strong recovery in the services sector was driven by the reopening of businesses. GBP/USD fell after edging higher on the data, and closed last week at 1.3863, down 0.06% on the week. Separately, the UK unemployment rate is due out this week, after the country added 356,000 jobs in June, the biggest increase since the COVID-19 outbreak. And the BOE expressed concern about inflation in its monetary policy meeting and they expected the UK inflation rate could reach 4% this year, far above its target of 2% inflation target. Thus, the UK CPI will be the focus of the market, which could lead to another wobble in sterling.

Last One With recent unfavorable news,is gold and silver deep in trouble?
Next One Taper is about to start? USD stood several-month high!
Latest Release
Popular Reading