Abstract: Is the Federal Reserve's hawkish stance supported by the positive economic data? It hinges on June's non-farm payrolls data. Despite May's non-farm payrolls miss market expectation, the labor market is widely expected to continue its rebound in June, possibly adding nearly 700,000 jobs, as vaccine coverage increases and state governments gradually lift business restrictions. Given the current mixed views among Federal Reserve officials regarding the tightening of quantitative easing, investors view the employment data as a bellwether of the Federal Reserve's policy shift. Therefore, June's non-farm payrolls data is likely to be the most important event for the gold and dollar market.

The non-farm payrolls report disappointed again in May. It showed the U.S. added 559,000 new jobs in May, well below market expectations for a 670,000 increase. In addition, the unemployment rate fell from 6.1% to 5.9%, as the labor-force participation rate fell to 61.6%. As the economy reopened, the employment-to-population ratio rose to 58.8%, but the drop in the labor-force participation rate suggested some people were dropping out of the job market. Meanwhile, the service sector continued to be the main contributor to May's non-farm payrolls. Employment in the leisure and hospitality sector rose by 292,000, while public and private education gained by 144,000 jobs, helped by the reopening of the economy, as shown below: 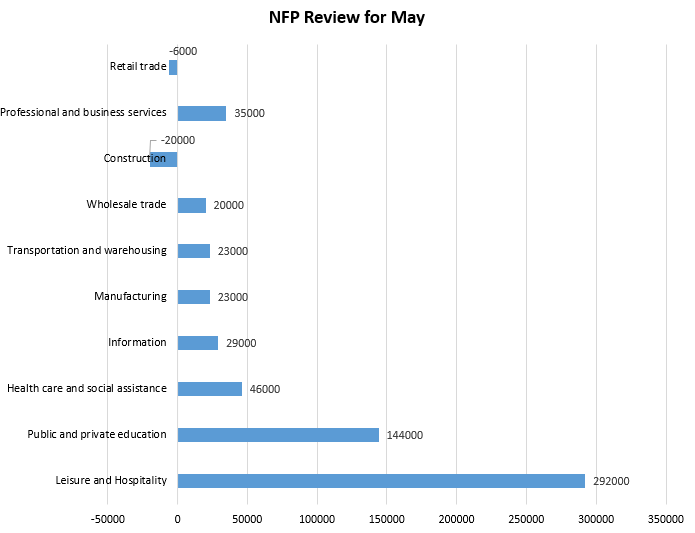 Separately, increased vaccine coverage and fewer new cases of the virus prompted states to ease restrictions on business, which in turn kept economic growth at a brisk pace. Still, the U.S. still had nearly 7 million fewer jobs than it did before the pandemic. Thus, June’s non-farm payrolls data was seen as a bellwether of a Federal Reserve (Fed) policy change to a hawkish tone at the Fed's rate-decision meeting. If the June jobs report continues to show strong gains as the market expects, the Fed's plans to scale back its bond purchases and raise interest rates may become clearer. How does the US job market look like in June?

While millions of Americans were still out of work, many American businesses were having trouble hiring people. The mismatch between labor supply and demand and the over-reliance of the unemployed on government benefits became key factors leading to labor shortages. The U.S. airline industry, for example, was struggling to cope with surging demand for travel as the number of COVID-19 infections continued to decline and restrictions on economic activity were lifted. American Airlines recently said it was likely to cancel at least 50 to 80 flights a day between late June and early July because of weather and labor shortages. As a result, labor shortages not only choke off consumer demand and hamper the recovery, but may also force U.S. companies to raise wages to meet employment needs, increasing the risk of inflation.

The move came after a bipartisan debate over the labor shortage. Democrats had cited issues such as the risk of viral infections and child care as important factors in keeping people from looking for work, but the extra unemployment benefits were a key support for American families and those who lost their jobs while the economic recovery was still under way. Republicans, on the other hand, said the benefits discouraged the unemployed from looking for work and made it harder for businesses to hire workers. In June, 21 states, including Missouri, scrapped ahead of schedule extra unemployment benefits of $300 a week that had been due to expire in September, which may encourage more Americans to look for work and push the number of Americans receiving unemployment benefits down further. But the decline in initial claims for unemployment insurance appeared to have stopped in mid-June, as shown below: 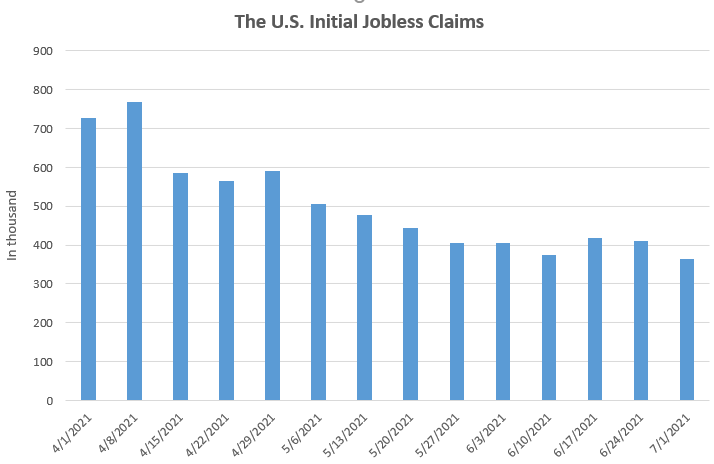 Still, the U.S. job market was moving in the right direction, with more vaccinations, more demand from employers, and state and local governments phasing out restrictions on business. Employment gains, a drop in the unemployment rate, and upbeat consumer sentiment all pointed to further improvement in the job market. As for June’s non-farm payrolls data, a consensus forecast was between 683,000 to 711,000 job added in June and the unemployment rate to fall to 5.7% from 5.8%, while more aggressive forecasts were for an increase of 800,000 jobs and a fall in the unemployment rate to 5.5%.

How will the gold and dollar react to the non-farm payrolls data?

1. Gold traded sideways, waiting for June's non-farm payrolls data. Gold had fallen from its $1909 peak to just below $1,750 an ounce after the Fed's unexpectedly hawkish stance. And it metal then traded sideways as investors became more hesitant due to the mixed views of the Fed officials on tightening quantitative easing. But the metal rose sharply on back of the May non-farm payrolls data. Going forward, gold could break out of its current narrow range if the data still falls short of market expectations and the Fed continues quantitative easing to support employment as improvements in the U.S. labor market are inconsistent with the pace of economic recovery.

2. The dollar surged before falling back. Can it gain upside momentum? The Fed said at its June monetary policy meeting that Fed officials expected to raise interest rates twice before 2023 and might taper bond purchases earlier. The dollar regained momentum to skyrocket after the meeting. The U.S. dollar index had climbed as high as 92.4, but trading in the greenback kept dismal as investors stayed on the sidelines ahead of the non-farm payrolls report. If the jobs data is in line with expectations, it could further push the Fed to tighten monetary policy and support a rise in the dollar. Otherwise, inflation risks will rise and the dollar's bullish trend could be reversed as a result of weak non-farm payrolls data.