Gold remained depressed through the mid-European session and dropped to fresh weekly lows, around the $1842-41 region in the last hour. Bearish traders are now looking to drag the commodity further below a one-week-old ascending trend-line, which constituted the formation of a symmetrical triangle.

Given the recent sharp pullback from monthly tops, around the $1960 region touched on January 6, the triangle could be categorised as a bearish continuation pattern – pennant. This, in turn, favours bearish traders and supports prospects for the resumption of a one-month-old downward trajectory.

Meanwhile, technical indicators on hourly charts have been gaining negative traction and have just started drifting into the bearish territory on the daily chart. This further adds credence to the negative outlook and a possible slide back towards challenging the $1800 round-figure mark.

In the meantime, intermediate support levels are pegged near the $1835 region ahead of the $1827 level and $1820-18 area. A sharp pullback in the equity markets could extend some support to the safe-haven XAU/USD and help limit deeper losses as the focus remains on the FOMC monetary policy decision.

On the flip side, the $1851-52 horizontal zone now seems to act as immediate resistance. Any subsequent move beyond the mentioned hurdle might still be seen as a selling opportunity and runs the risk of fizzling out rather quickly near the triangle resistance, around the $1860-62 region. 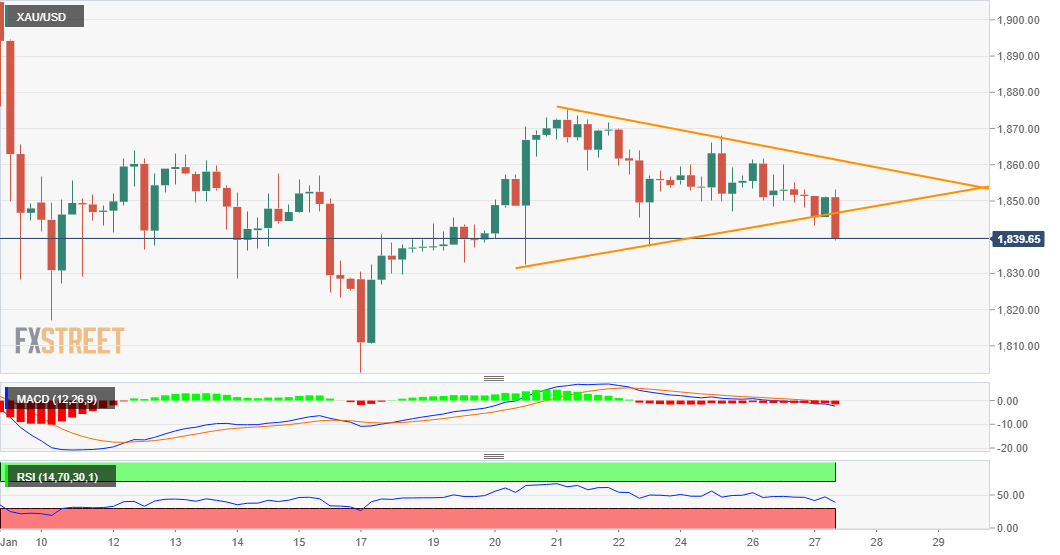 Please note that trading losses can be the entire of your capital. Refer to our PDS and ensure you understand the risks involved.